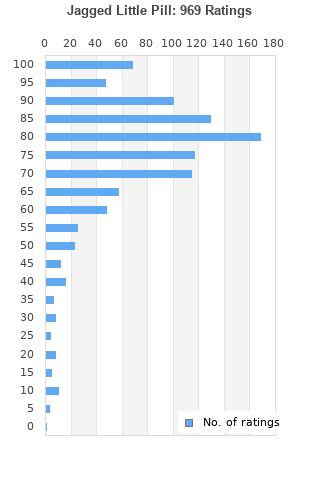 Jagged Little Pill is ranked as the best album by Alanis Morissette. 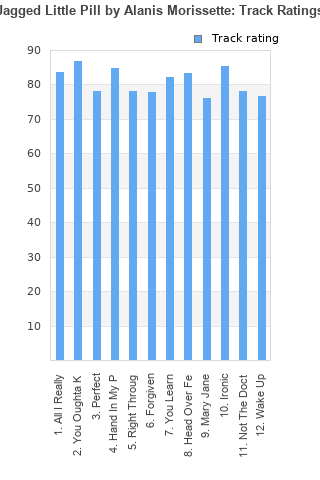 Rating metrics: Outliers can be removed when calculating a mean average to dampen the effects of ratings outside the normal distribution. This figure is provided as the trimmed mean. A high standard deviation can be legitimate, but can sometimes indicate 'gaming' is occurring. Consider a simplified example* of an item receiving ratings of 100, 50, & 0. The mean average rating would be 50. However, ratings of 55, 50 & 45 could also result in the same average. The second average might be more trusted because there is more consensus around a particular rating (a lower deviation).
(*In practice, some albums can have several thousand ratings)
This album is rated in the top 5% of all albums on BestEverAlbums.com. This album has a Bayesian average rating of 76.7/100, a mean average of 74.9/100, and a trimmed mean (excluding outliers) of 76.8/100. The standard deviation for this album is 18.3.

One of the 90's best albums, with great songs and songwriting + even a few hits for the posterity.

Ironic is a great track - Not The Doctor, Mary Jane and Right Through You are good too, but overall I found the album very samey and unmemorable.

Listening to this again in 2021. It's quite a walk down memory lane. Man this album was huge. Absolutely one of the biggest albums of the 90s.

The hits are the hits for a reason. But there are a bunch of them.

Very influential album packed with great tunes angst and anger. Great bass on the standout track you oughta know. 'Are you thinking of me when you .... her' probably not !!! Her new album is a return to form after her debut follow up disaster which was dirge.

Her voice here is full of energy. On later albums, it was no longer like that. This album is exceptional not only in comparison with other artists, but also in the discography of Alanis Morissette.
For several months it was my most listened to album. I bought it in the summer of 1996 and I listened to it over and over for about half a year. I bought the album as a cassette at the time and listened to it three times a day from start to finish. A few years later, I bought the album again, as a CD.
For me, some songs clearly radiated a kind of spiritual aura. These are the songs You ought know, Wake Up, All I really Want, Hand in my pocket, Ironic. At that time in 1996, I was fascinated on TV by music videos by Alanis Morissette and Joan Osobrne. I was 14 and I didn't have the money to buy both albums at once. Because I saw more good singles from Alanis, I bought the album Jagged Little Pill. Then I wished Joan Osborne's album Relish as a gift for Christmas 1996.

So Many Amazing Songs!

It is a realy debut Alanis album, and it is amazing debut

Your feedback for Jagged Little Pill