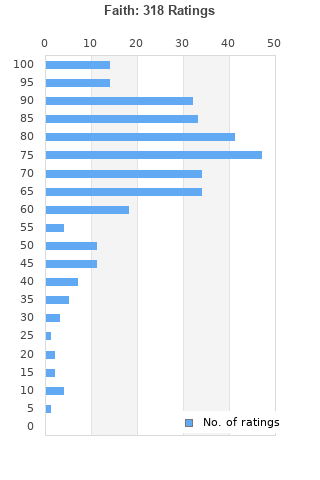 George Michael Faith Cassette
Condition: Very Good
Time left: 44m 14s
Ships to: Worldwide
$8.00
Go to store
Product prices and availability are accurate as of the date indicated and are subject to change. Any price and availability information displayed on the linked website at the time of purchase will apply to the purchase of this product.  See full search results on eBay

Faith is ranked as the best album by George Michael. 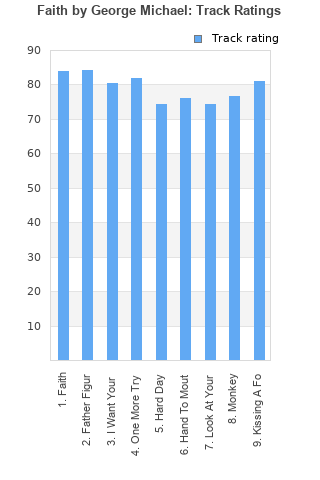 Rating metrics: Outliers can be removed when calculating a mean average to dampen the effects of ratings outside the normal distribution. This figure is provided as the trimmed mean. A high standard deviation can be legitimate, but can sometimes indicate 'gaming' is occurring. Consider a simplified example* of an item receiving ratings of 100, 50, & 0. The mean average rating would be 50. However, ratings of 55, 50 & 45 could also result in the same average. The second average might be more trusted because there is more consensus around a particular rating (a lower deviation).
(*In practice, some albums can have several thousand ratings)
This album has a mean average rating of 72.0/100. The trimmed mean (excluding outliers) is 73.2/100. The standard deviation for this album is 19.3.

I hadn't listened to this album in years. The first 3 songs, are good, hits, after that, it's a lot of filler, dragging to Kissing A Fool.

A great pop album carrying on and improving on his albums as Wham ! Father Figure, Kissing a Fool, Hard Day & Hand To Mouth are my personal favourites. Better albums would follow in the shape of Listen Without Prejudice & Older. An overall underrated artist only time will tell how he will be viewed in the future.

A personal favorite of mine. Faith is a classic, Father Figure is a masterpiece, Monkey is a banger, and Kissing a Fool is a heartbreaker.

Imperfect (the second half can drag) but otherwise well-written and genuinely emotional 80s pop album. "Father Figure" is a highlight for its haunting beat and melody and meta-devotional lyrics. The other highlight is "I Want Your Sex", a song often misinterpreted as a sex-positive anthem that's really a genius tale of unreciprocated love (especially taking that sultry third part into account)

I really like One more try. Then Kissing a fool and Faith are good too. The more pop-dance oriented songs are not for my taste.
Overall I like his voice when he sings soul and ballads and pretty much that's it.

Some really good tracks in, father figure, one more try, and the title track, and, monkey, and, kissing a fool, are fine, but the rest is just forgettable filler. Michael is obviously trying hard to be taken more seriously and in some instances it works, but over the length of a whole album he struggles to keep up a level of consistent quality.

Two really good pop hits (Faith and Father Figure) and the rest just sounds a bit dated/boring to me.

As near to a perfect pop record as you will ever hear.

Your feedback for Faith