Re (studio album) by Café Tacuba 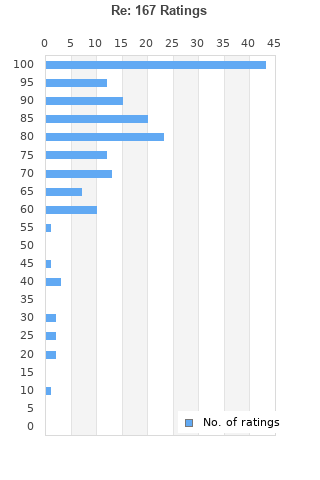 Cafe Tacuba Re 1994 Wea Cd Mexico
Condition: Very Good
Time left: 6d 2h 51m 28s
Ships to: Worldwide
$10.00
Go to store
Product prices and availability are accurate as of the date indicated and are subject to change. Any price and availability information displayed on the linked website at the time of purchase will apply to the purchase of this product.  See full search results on eBay

Re is ranked as the best album by Café Tacuba. 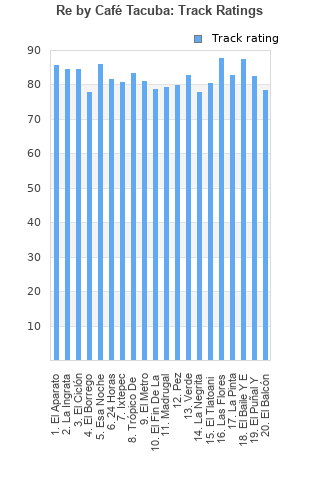 Rating metrics: Outliers can be removed when calculating a mean average to dampen the effects of ratings outside the normal distribution. This figure is provided as the trimmed mean. A high standard deviation can be legitimate, but can sometimes indicate 'gaming' is occurring. Consider a simplified example* of an item receiving ratings of 100, 50, & 0. The mean average rating would be 50. However, ratings of 55, 50 & 45 could also result in the same average. The second average might be more trusted because there is more consensus around a particular rating (a lower deviation).
(*In practice, some albums can have several thousand ratings)
This album is rated in the top 1% of all albums on BestEverAlbums.com. This album has a Bayesian average rating of 82.9/100, a mean average of 81.7/100, and a trimmed mean (excluding outliers) of 83.6/100. The standard deviation for this album is 18.6.

Whenever I hear this album, I think of the Mexican game La Lotería. It's a type of bingo board game. The images represent elements of Mexican folklore, a chaotic Mexican tarot that portraits our luck.

Re is a lottery. It takes you from the coast of Veracruz with "La Negrita" to the turmoil created by 25 million people in the transportation veins of Mexico City: "El Metro".

It's a musical bingo where you can find boleros, banda, and other Latin American genres mixed with punk, pop, and rock songs.

It's a beautiful journey and a playful ode to Mexico.

When an album is this long (White Album, London Calling, The Wall...), the result is usually inconsistent. Re would be much better if they had cut out 5 o 6 tracks (El fin de la infancia, El borrego, Madrugal and Verde come to mind) that severely hurt the album as a whole for me.

There is some truth in the comparison has been made of this album compared to the Beatles' White Album, the album combines national folklore rhythms with rock, punk, bolero, in short it is an eclectic album. an instant classic

Your feedback for Re