The Way Out (studio album) by The Books 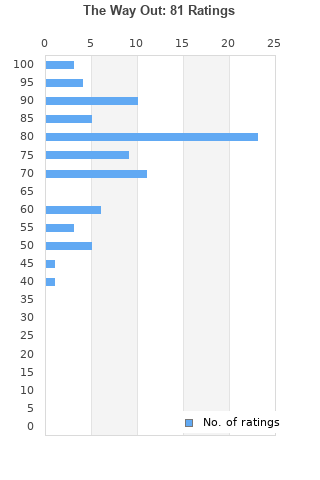 The Way Out, The Books, Good
Condition: Good
Time left: 11d 16h 31m 53s
Ships to: Worldwide
$6.82
Go to store
Product prices and availability are accurate as of the date indicated and are subject to change. Any price and availability information displayed on the linked website at the time of purchase will apply to the purchase of this product.  See full search results on eBay

The Way Out is ranked 2nd best out of 6 albums by The Books on BestEverAlbums.com.

The best album by The Books is The Lemon Of Pink which is ranked number 1713 in the list of all-time albums with a total rank score of 1,001. 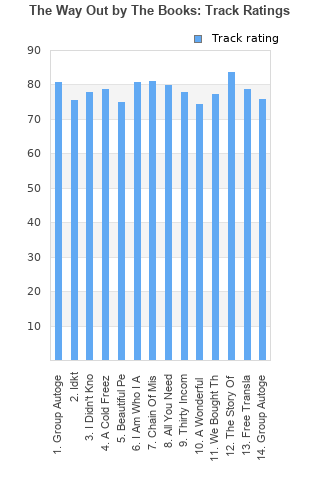 The Way Out rankings

The Way Out collection

The Way Out ratings

Rating metrics: Outliers can be removed when calculating a mean average to dampen the effects of ratings outside the normal distribution. This figure is provided as the trimmed mean. A high standard deviation can be legitimate, but can sometimes indicate 'gaming' is occurring. Consider a simplified example* of an item receiving ratings of 100, 50, & 0. The mean average rating would be 50. However, ratings of 55, 50 & 45 could also result in the same average. The second average might be more trusted because there is more consensus around a particular rating (a lower deviation).
(*In practice, some albums can have several thousand ratings)
This album is rated in the top 13% of all albums on BestEverAlbums.com. This album has a Bayesian average rating of 75.4/100, a mean average of 75.7/100, and a trimmed mean (excluding outliers) of 75.7/100. The standard deviation for this album is 13.5.

The Way Out favourites

The Way Out comments

The Books has made musical digression its science. Formed in 1999 by guitarist Nick Zammuto and cellist Paul de Jong, The Books is certainly one of the best-kept secrets of the indie scene. It is a leading band of the avant-garde thanks to its first two albums "Thought For Food" (2002) and "The Lemon Of Pink" (2003), which are classics of folktronica. Their latest album, "The Way Out", is based on an organic foundation (cello, banjo or guitar), a collage of disparate beats and lyrics more spoken than sung, which articulate an absurd statement. "The Way Out" is particularly mastered, measured and melodically accessible. A fourth tour de force that arises after 5 long years of absence.

Wow! This album is actually really impressive. It's playful and super creative. The song "The Story of Hip Hop" really sums up all the greatest qualities of this whole album-it's upbeat and well produced and really it's own genre. It's the books at their best. And right at the end of that track you get the idea that that story could be a metaphor or could have a bigger meaning. Or maybe that's just rubbish and it has no deeper meaning. It's really all about what significance you place on it. For me the whole record flows well. The spoken word samples meld very very nicely. The instrumentation is serene and precise. The music never seems predictable. It's not a perfect record, not every track clicks 100% for me at least. But it is one of the greatest albums of 2010 and Soooooooo ridiculously underrated! Check it out!

Profound and playful in equal measures, what could have been a cynical mockery of spiritual inquest turns out to be a joyous soul-searching experience.

Your feedback for The Way Out