Live From The Atlantic Studios (live album) by AC/DC 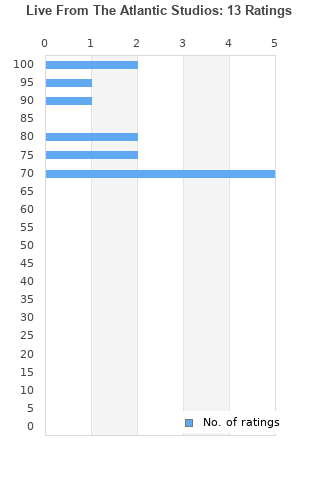 Live From The Atlantic Studios is ranked 24th best out of 28 albums by AC/DC on BestEverAlbums.com.

The best album by AC/DC is Back In Black which is ranked number 135 in the list of all-time albums with a total rank score of 12,290.

Listen to Live From The Atlantic Studios on YouTube 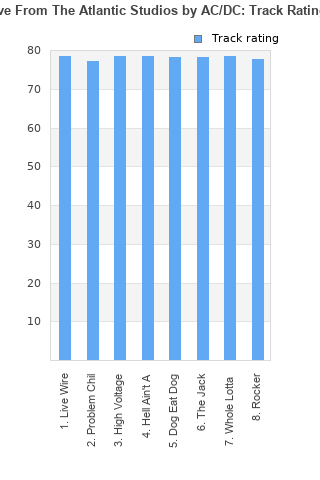 Live From The Atlantic Studios rankings

Live From The Atlantic Studios collection

Live From The Atlantic Studios ratings

Rating metrics: Outliers can be removed when calculating a mean average to dampen the effects of ratings outside the normal distribution. This figure is provided as the trimmed mean. A high standard deviation can be legitimate, but can sometimes indicate 'gaming' is occurring. Consider a simplified example* of an item receiving ratings of 100, 50, & 0. The mean average rating would be 50. However, ratings of 55, 50 & 45 could also result in the same average. The second average might be more trusted because there is more consensus around a particular rating (a lower deviation).
(*In practice, some albums can have several thousand ratings)
This album is rated in the top 1% of all albums on BestEverAlbums.com. This album has a Bayesian average rating of 83.8/100, a mean average of 88.5/100, and a trimmed mean (excluding outliers) of 88.5/100. The standard deviation for this album is 12.7.

Live From The Atlantic Studios favourites

Live From The Atlantic Studios comments

This gig is just one of the many examples of why Bon Scott era AC/DC is the greatest band of all time. The energy that they had was incredible. Malcolm Young, Phil Rudd, and Cliff Williams is the tightest and most powerful rhythm section ever and Bon was truly one of a kind. His attitude and voice was one of a kind and he’s still missed to this day.

I remember hearing this on the Friday Rock Show with Tommy Vance in the early 80's, and being totally blown away by it. To me It's by far their best ever album, and every hard rock fan needs to hear it.

Your feedback for Live From The Atlantic Studios