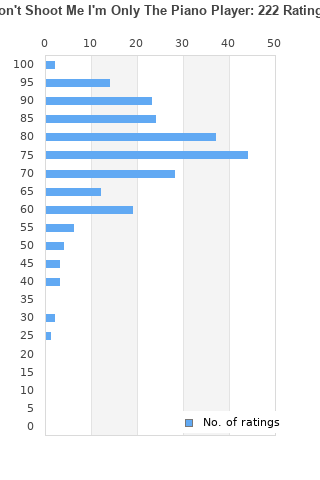 Don't Shoot Me I'm Only The Piano Player - Elton John (Single LP)
Condition: Used
Time left: 2h 6m 32s
Ships to: Worldwide
$8.08
Go to store
Product prices and availability are accurate as of the date indicated and are subject to change. Any price and availability information displayed on the linked website at the time of purchase will apply to the purchase of this product.  See full search results on eBay

Don't Shoot Me I'm Only The Piano Player is ranked 7th best out of 47 albums by Elton John on BestEverAlbums.com.

The best album by Elton John is Goodbye Yellow Brick Road which is ranked number 240 in the list of all-time albums with a total rank score of 8,238.

Don't Shoot Me I'm Only The Piano Player track list 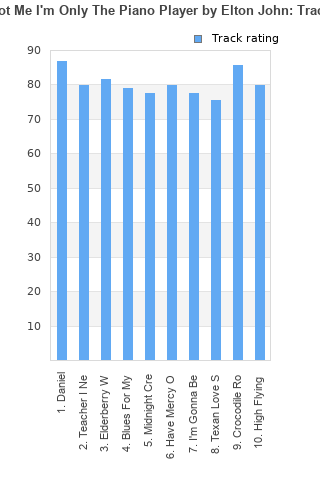 Don't Shoot Me I'm Only The Piano Player rankings

Don't Shoot Me I'm Only The Piano Player collection

Don't Shoot Me I'm Only The Piano Player ratings

Rating metrics: Outliers can be removed when calculating a mean average to dampen the effects of ratings outside the normal distribution. This figure is provided as the trimmed mean. A high standard deviation can be legitimate, but can sometimes indicate 'gaming' is occurring. Consider a simplified example* of an item receiving ratings of 100, 50, & 0. The mean average rating would be 50. However, ratings of 55, 50 & 45 could also result in the same average. The second average might be more trusted because there is more consensus around a particular rating (a lower deviation).
(*In practice, some albums can have several thousand ratings)
This album is rated in the top 20% of albums on BestEverAlbums.com. This album has a mean average rating of 74.0/100. The trimmed mean (excluding outliers) is 74.7/100. The standard deviation for this album is 13.4.

Don't Shoot Me I'm Only The Piano Player favourites

Don't Shoot Me I'm Only The Piano Player comments

Another in that incredible run of LP's Elton John released in the seventies. Great songs as always including, Daniel, eldebery wine, and, crocodile rock. I don't think it's as good as some of his other albums around this time but it's stil a good record. Elton really was on a roll at this time.

Amazing top tracks, but it drops off. He always seems to have 75% of a brillian album.

"This is a largely melody-based album- Its purpose is to find its way into your brain and stick there. There are piano hooks, lush vocal harmonies, and easily-clappable drum beats. There are cheesy lyrics, dated 70s moments, and clean production. Here on BEA we typically see those aspects as detriments to an album's quality, but that view is largely ignorant of albums that use those aspects to their advantage. Don't Shoot Me takes those attributes and utilizes them better than any album before or after."
^From my chart description of the album

I probably give Don't Shoot Me a bit too much credit…but I have a great emotional connection to the record and truly love it on every level.

More piano pop goodness from Elton, continuing the embellished groove he and his band team found on "Honky Chateau", he apes his musical heros well, especially on "crocodile rock".

Fifth high quality album in a row by Elton John. The bonus tracks on the CD release are also great.

another not great album, but "elderberry wine" and "Skyline Pigeon"(Not originally on this album) are really good.

Your feedback for Don't Shoot Me I'm Only The Piano Player