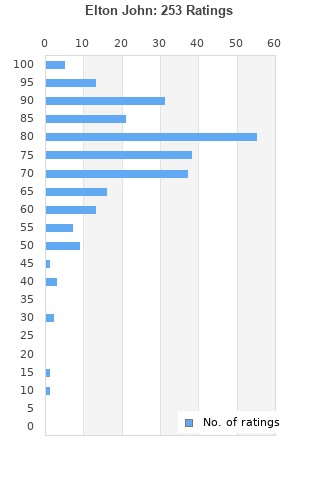 Love Songs by Elton John (1996) (Audio Cassette)
Condition: Very Good
Time left: 8m 31s
Ships to: Worldwide
$5.91
Go to store
Product prices and availability are accurate as of the date indicated and are subject to change. Any price and availability information displayed on the linked website at the time of purchase will apply to the purchase of this product.  See full search results on eBay

Elton John is ranked 6th best out of 47 albums by Elton John on BestEverAlbums.com.

The best album by Elton John is Goodbye Yellow Brick Road which is ranked number 240 in the list of all-time albums with a total rank score of 8,244. 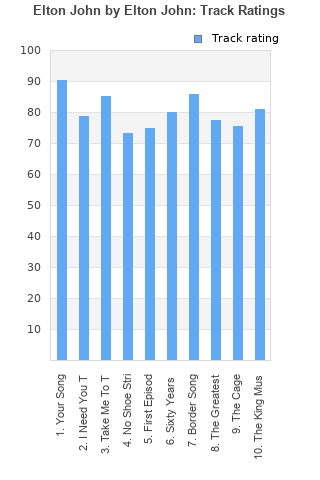 Rating metrics: Outliers can be removed when calculating a mean average to dampen the effects of ratings outside the normal distribution. This figure is provided as the trimmed mean. A high standard deviation can be legitimate, but can sometimes indicate 'gaming' is occurring. Consider a simplified example* of an item receiving ratings of 100, 50, & 0. The mean average rating would be 50. However, ratings of 55, 50 & 45 could also result in the same average. The second average might be more trusted because there is more consensus around a particular rating (a lower deviation).
(*In practice, some albums can have several thousand ratings)
This album is rated in the top 14% of albums on BestEverAlbums.com. This album has a mean average rating of 74.0/100. The trimmed mean (excluding outliers) is 75.3/100. The standard deviation for this album is 14.3.

I feel like this album really captures the essence of Elton John's music: Beautiful, thoughtful and dramatic all at once. Some classic songs can be found here, but I prefer the complexity and depth from the lesser known tracks and B-sides.

Overall, an elegant and sensitive record from one of rock music's greatest.

Strong early release. Contains many gems - which are stand-outs in his large catalogue.

Elton John's second album is probably his most intimate of his early records. Predominately piano ballads with a sprinkling of orchestration, it's certainly not a rock'n'roll album. Some nice songs; obviously, your song, is one of Elton's most famous songs, a lovely track. Elsewhere, there's, take me to the pilot, border song, and the king must die. A good record.

Your Song may be one of the best songs I haven't heard in a long time...

A relatively forgotten classic. A few weak tracks, but so much beautiful music on here, Elton's debut would easily make my top 100. Highlights: "Sixty Years On," "King," "Border Song," and "Pilot. And, of course, "Your Song" is one of the prettiest love songs ever. Rating based on original release (without last three songs).

There are so many beautiful songs on this one.

I remember buying "Your Song" as a single in fall of 1970...it really blew me away, I think that it is still his best song.

Sir Elton started out strong. Best tracks: Your Song and Take Me to the Pilot. Get the expanded re-release that includes Bad Side of the Moon and Rock N Roll Madonna.

My continued search for something new. Bringing rock music in new directions, like Bowie. In this case fusing classical elements with the standard rock sound. Border Song, Sixty Years On, The King must Die, and of course Your Song. This album is truly unique in Elton's catalog.

Your feedback for Elton John