Our Mother The Mountain (studio album) by Townes Van Zandt 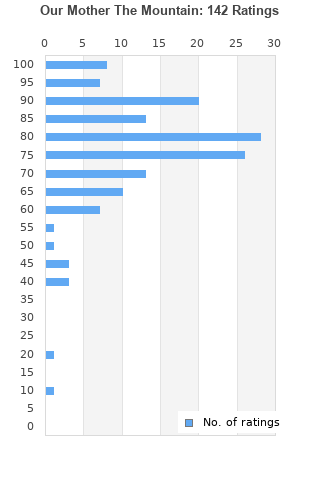 Our Mother The Mountain is ranked 2nd best out of 31 albums by Townes Van Zandt on BestEverAlbums.com. 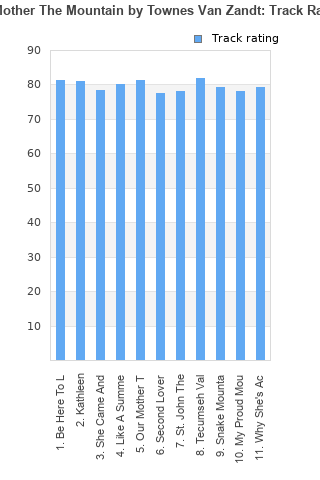 Our Mother The Mountain rankings

Our Mother The Mountain collection

Our Mother The Mountain ratings

Rating metrics: Outliers can be removed when calculating a mean average to dampen the effects of ratings outside the normal distribution. This figure is provided as the trimmed mean. A high standard deviation can be legitimate, but can sometimes indicate 'gaming' is occurring. Consider a simplified example* of an item receiving ratings of 100, 50, & 0. The mean average rating would be 50. However, ratings of 55, 50 & 45 could also result in the same average. The second average might be more trusted because there is more consensus around a particular rating (a lower deviation).
(*In practice, some albums can have several thousand ratings)
This album is rated in the top 3% of all albums on BestEverAlbums.com. This album has a Bayesian average rating of 78.4/100, a mean average of 77.8/100, and a trimmed mean (excluding outliers) of 78.8/100. The standard deviation for this album is 14.6.

Our Mother The Mountain favourites

Our Mother The Mountain comments

This is TVZ's second album and is often considered his first classic. And I agree its amazing in mnay ways. But much of what I wasn't a huge fan of on his debut, "For The sake of the Song", is still prevalent here. Namely, the production is still a bit much. The flutes and the orchestras and gizzards and wizards and smizzards...okay not those last 3. But yeah, I mean, the SONGs, THE SONGSSSS, are amazing. Townes, its well know, was one of the most stunning lyricists and poets of all time. The poet laureate of the texas troubadours, the plain spoken soothe sayer. The man who gave us detailed looks into the hearts and sould, both the light and dark, of the human being.

But for example on the great opening track "Be Here To Love Me", do I really need that flute and that intrusive tambourine? Not really. But its still, despite the overzealous aspects, a 9/10 song, a great one. On other classics, like the absolutely haunting "Kathleen" and "St. John The Gambler" the orchestral parts are actually pretty fabulous. There are styill some points in those songs when I think "That's a bit much".

Gosh, why am I being so negative!?

Okay, so this albums flaws are thoroughly outnumbered by the positives. For example, is there a bad song or even a merely good song here? Lyrically? NO! This set of songs is astounding, "Kathleen", "Like A Summer Thursday", Tecumsah Valley", "My Proud Mountains", "Our Mother The Mountain", "St. John The Gambler", are all amazing.

I look at TVZ's discog kinda like I do a star athlete. With an athlete, their prime is usually right at about 26-29. Their athletic freak prime is usually at its height when they're wee boys or girls, when they're 21-24. They're wisdom and their smarts are at their best when they are older and before they have been dulled by concussions and beatings, so maybe their smarts peak is 30-33. So that prime is just when those 2 peaks come closest toegther. This is just my theoryy and may be complete BS by the by. Okay so, with Townes, the 2 factors are 1. The quality of the songs, the poetry, the truth of the songs, and the vitality of his voice etc and 2. the stripped down aspect of the songs and the recordings. So with his debut, the songs are great, vibrant, not yet his best, but pretty good and his voice is great, but the production is cartoonish by and large. But his Live at the old quarter is when he's still got a strong voice and vitality but his songs are at their best, and the sound is blissfully stripped down and raw, just him a guitar and some harmonica. So where does this second album lie? His voice kills and the songs are really good, and the production is less cartoonish but still a bit overboard. Not his "athletic peak" (to keep that going). This is the equivalent of that Basketball SF at the age of 23 with insane natural gifts, putting up mondo stats, but just not yet having the court vision to bolster his teammates yet and so they lose in the 1st round of the playoffs. But just wait until next season!!!!

Borrowing elements from folk, country, blues and tex-mex, Townes Van Zandt's poetry is emotionally intense. His gentle acoustic style has a unique desolate quality to it and his stories are simultaneously intimate and universal.

Your feedback for Our Mother The Mountain