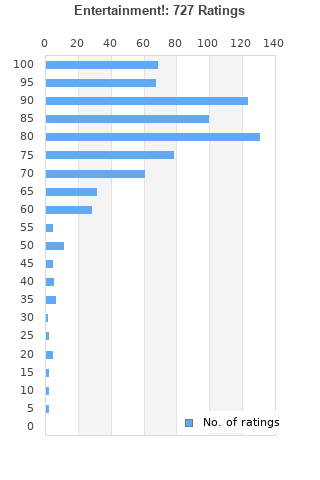 Entertainment! is ranked as the best album by Gang Of Four. 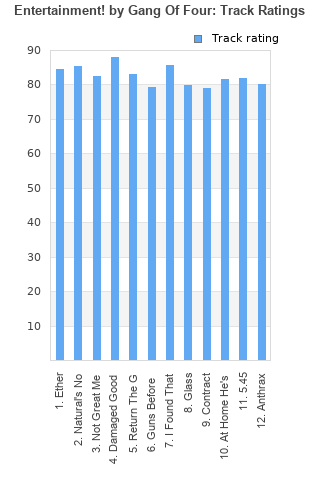 Rating metrics: Outliers can be removed when calculating a mean average to dampen the effects of ratings outside the normal distribution. This figure is provided as the trimmed mean. A high standard deviation can be legitimate, but can sometimes indicate 'gaming' is occurring. Consider a simplified example* of an item receiving ratings of 100, 50, & 0. The mean average rating would be 50. However, ratings of 55, 50 & 45 could also result in the same average. The second average might be more trusted because there is more consensus around a particular rating (a lower deviation).
(*In practice, some albums can have several thousand ratings)
This album is rated in the top 1% of all albums on BestEverAlbums.com. This album has a Bayesian average rating of 81.4/100, a mean average of 80.4/100, and a trimmed mean (excluding outliers) of 81.5/100. The standard deviation for this album is 15.3.

Still a mystery to me, the punk that is. The masterpiece status applied to this is an enigma. Influential, yes. Sonically interesting, yes. A work of geniuses, perhaps not. As I'm not a native English, they do not grab me directly.

not as horrible as most punk

Highly influential yet somehow under appreciated ‘Entertainment’ was a significant influence on my music tastes coming out in 1979 just as my musical DNA was being formed. The albums fusion of funk, dance music, reggae dub and punk was like nothing we’d heard at the time and combined with its powerful left wing political lyrics and album artwork (the album's back cover depicted a family whose father says, "I spend most of our money on myself so that I can stay fat", while the mother and children declare, "We're grateful for his leftovers" - this always struck a chord with me) made for a potent mix

Jangly punk riffs that appeal to me in the way that early XTC does.

I'm not really a fan of punk music, but I must admit that this album is impressive.

Good punk, love the other styles it mixes its sound with. Not groundbreaking, but it rocks and it's fun, which is much better than trying dumb experimental shit that sounds like shit.

Very underrated. One of the best punk albums ever made!

Favorite tracks: Damaged Goods, Natural’s Not in It, I Found that Essence Rare, Glass, Contract, 5.45

Very very good! So glad I found this.

Your feedback for Entertainment!