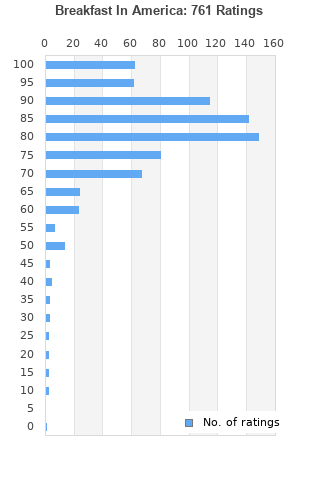 Breakfast In America is ranked 2nd best out of 20 albums by Supertramp on BestEverAlbums.com.

The best album by Supertramp is Crime Of The Century which is ranked number 270 in the list of all-time albums with a total rank score of 6,963. 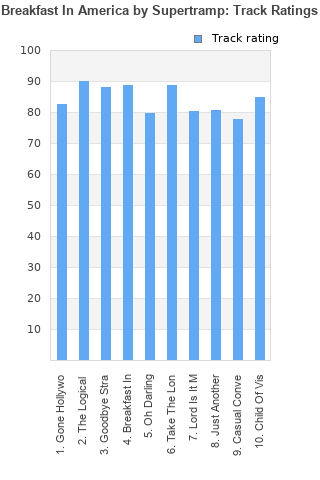 Rating metrics: Outliers can be removed when calculating a mean average to dampen the effects of ratings outside the normal distribution. This figure is provided as the trimmed mean. A high standard deviation can be legitimate, but can sometimes indicate 'gaming' is occurring. Consider a simplified example* of an item receiving ratings of 100, 50, & 0. The mean average rating would be 50. However, ratings of 55, 50 & 45 could also result in the same average. The second average might be more trusted because there is more consensus around a particular rating (a lower deviation).
(*In practice, some albums can have several thousand ratings)
This album is rated in the top 1% of all albums on BestEverAlbums.com. This album has a Bayesian average rating of 81.7/100, a mean average of 80.7/100, and a trimmed mean (excluding outliers) of 81.8/100. The standard deviation for this album is 13.9.

A more accessible release by Supertramp but it still has a lot of quality to sink your teeth into. It kicks off brilliantly with one of the lesser appreciated songs of Gone Hollywood. The quality is then continued into track 2 which is one of the most irresistible songs they have ever put out in the form of The Logical Song. Both of these cuts demonstrate the peak of what I think is the highlight of this record which is the saxophone. Some of the solos we are treated to on the sax is just phenomenal and it is consistent the whole way through. This is also true about the style which is maintained and every song is at least decent. Another thing I love about this record is the keyboard playing which when combined with the other diverse instrumentation creates a wonderful blend of prog and pop. It is the keyboard that stands out for me though and it is what makes the blend really work. However, the record does get a little weak and slow near the end and I do think it could be cut down by 10 or 15 minutes. Overall, a great record with brilliant performances and it is well worth checking out.

Long overdue. never heard this album before. A classic from 79'

Ok, can be commercial as you want, and it is; but is soooo good to listen... after Crime of the Century my favourite from Supertramp and one of the albums i could listen in loop with no problems.

Only actually got their albums in recent years after living off a Greatest Hits. Not sure why as the tracks on that were superb and I loved their sound - this album didn't let me down.

Did not walk away very impressed by this, especially when you take into account Supertramp's other records. Still, Goodbye Stranger and Logical Song are great.

I can say the listen experience was good and very enjoyable. I would recommend this album to a friend. Standout tracks: The Logical Song, Breakfast in America.

The fact that Cannonball and Just Another Nervous Wreck both are rated 79/100 is atrocious. Both are top 10 Supertramp songs.

The album that made me understand the genius of Supertramp. Pretty much every song is great, I just don’t really like Casual Conversations.

Very consistent and beautiful album, but in my opinion not as cohesive and outstanding as Crime of the Century.

Your feedback for Breakfast In America