Damn The Torpedoes (studio album) by Tom Petty And The Heartbreakers

Damn The Torpedoes by Tom Petty And The Heartbreakers
Year: 1979
Overall rank: 746th 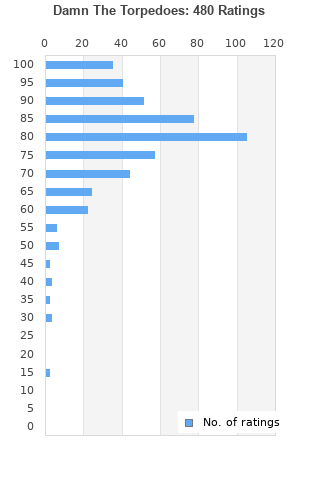 Tom Petty And The Heartbreakers bestography

Damn The Torpedoes is ranked as the best album by Tom Petty And The Heartbreakers. 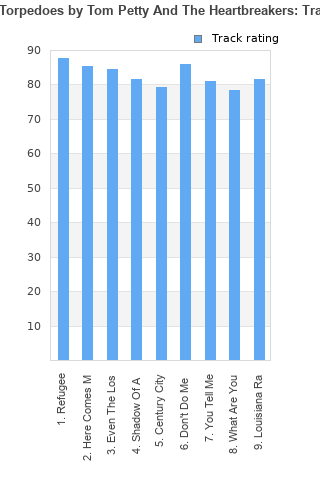 Rating metrics: Outliers can be removed when calculating a mean average to dampen the effects of ratings outside the normal distribution. This figure is provided as the trimmed mean. A high standard deviation can be legitimate, but can sometimes indicate 'gaming' is occurring. Consider a simplified example* of an item receiving ratings of 100, 50, & 0. The mean average rating would be 50. However, ratings of 55, 50 & 45 could also result in the same average. The second average might be more trusted because there is more consensus around a particular rating (a lower deviation).
(*In practice, some albums can have several thousand ratings)
This album is rated in the top 2% of all albums on BestEverAlbums.com. This album has a Bayesian average rating of 80.3/100, a mean average of 79.7/100, and a trimmed mean (excluding outliers) of 80.4/100. The standard deviation for this album is 13.1.

Good pop rock album, some tracks are great and some are just ok, but there's not a bad one.

The energy and spirit of this album never gets old. Damn the Torpedos is Petty's crowning achievement. Nothing else comes close. It's the one you will always go back to.

This has to be the definitive Tom Petty & the Heartbreakers album: Punchy, raucous, and loaded with swinging hits, it's a fun listen on both sides.

For those prefer the softer, familiar sounds of Tom Petty, check out 'Into The Great Wide Open' - but only after this Torpedo party is over!

Highly enjoyable, very catchy without a single track being below par.

An album more boosted by the quality of the best songs than penalized for the mediocre ones.

Tom Petty and the Heartbreakers at their peak. It's obvious these guys were more concerned with writing great songs rather than a great album, but they did both.

Another great album from TP

A truely great rock album that I played on high rotation when I discovered it in 1985 and still a great listen today. From Refugee to Even The Losers, Don't Do Me Like That and all the rest.

Your feedback for Damn The Torpedoes