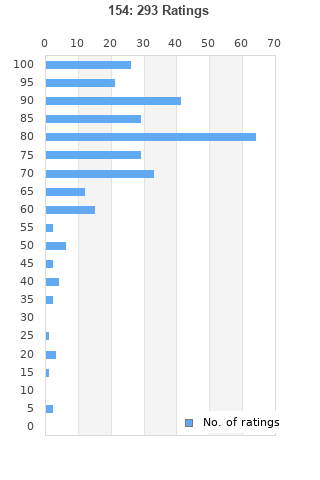 154 is ranked 3rd best out of 25 albums by Wire on BestEverAlbums.com.

The best album by Wire is Pink Flag which is ranked number 318 in the list of all-time albums with a total rank score of 5,936. 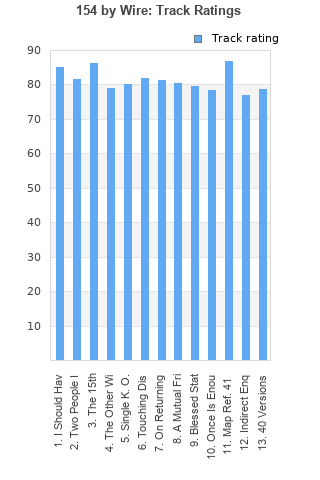 Rating metrics: Outliers can be removed when calculating a mean average to dampen the effects of ratings outside the normal distribution. This figure is provided as the trimmed mean. A high standard deviation can be legitimate, but can sometimes indicate 'gaming' is occurring. Consider a simplified example* of an item receiving ratings of 100, 50, & 0. The mean average rating would be 50. However, ratings of 55, 50 & 45 could also result in the same average. The second average might be more trusted because there is more consensus around a particular rating (a lower deviation).
(*In practice, some albums can have several thousand ratings)
This album is rated in the top 2% of all albums on BestEverAlbums.com. This album has a Bayesian average rating of 79.5/100, a mean average of 78.2/100, and a trimmed mean (excluding outliers) of 79.7/100. The standard deviation for this album is 16.7.

I feel like this is the darkest Wire record with original haunting sound, but I just don't find it appealing. There are some good tracks (I Should Have Known Better, The 15th, Single K.O., Map Ref), but there are some unlistenable ones as well (Indirect Enquirues, 40 Versions).

A very interesting and experimental listen that really captivates me with every listen. It sounds so mysterious and unique in terms of atmosphere and that is created by the distorted instruments and vocal. Mainly, it is the guitar which separates this album from other releases and you can tell that the group got very imaginative with the music on this one as the structure and style is so artistic. They can hop from genre to genre seamlessly especially on this record where you really don't know what is coming next. This keeps us entertained throughout and it is very hard to get bored while listening to this album. However, there are a few weaker tracks and this record does take a dip in quality when compared to their two bigger releases. Overall, there is a lot of fun to be had with this record and this group never fail to surprise me with what they deliver.

Pretty much every song on this record contains elements that, up to that point, are wholly unique to them. Map Ref. 41°N 93°W is an important step into shoegaze territory, as is this album in full.

It's unnerving, it mixes genres, it's dark but uplifting in parts - fantastic album! You definitely feel part of Wire's world as soon as the album starts and it doesn't let you go until the end. This one may rate even higher the more I listen to it!

The final installment in the band’s trilogy of early albums this continues the evolution to almost robotic dream like futuristic music. This is just as strong as first 2 albums way ahead of their time hopefully more people are discovering the band.

What an album...gothic rock one minute, stoner rock the next, than they hit you with some warped new wave textures. Brilliant.

Touching Display sounds like something Scott Walker would record.

The drawbacks in being blinded by your own arrogance are so high, that you haven't realised that you've made a fatal miscalculation in your proposition. Mass hysteria ensues.