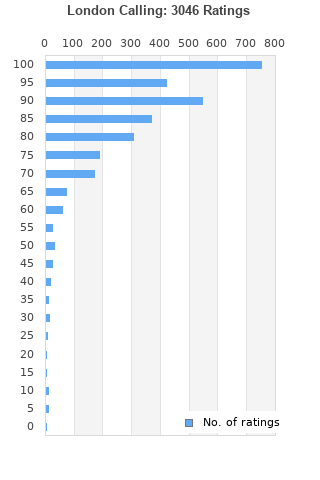 London Calling is ranked as the best album by The Clash. 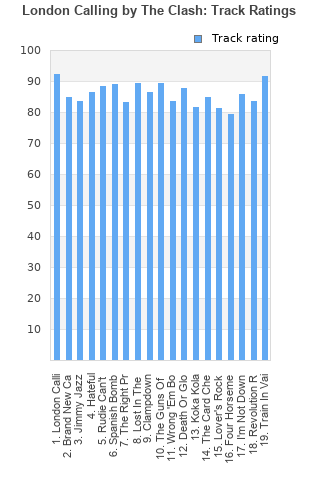 Lost In The Supermarket
Rating: 89 (633 votes)Comments:

Rating metrics: Outliers can be removed when calculating a mean average to dampen the effects of ratings outside the normal distribution. This figure is provided as the trimmed mean. A high standard deviation can be legitimate, but can sometimes indicate 'gaming' is occurring. Consider a simplified example* of an item receiving ratings of 100, 50, & 0. The mean average rating would be 50. However, ratings of 55, 50 & 45 could also result in the same average. The second average might be more trusted because there is more consensus around a particular rating (a lower deviation).
(*In practice, some albums can have several thousand ratings)
This album is rated in the top 1% of all albums on BestEverAlbums.com. This album has a Bayesian average rating of 86.9/100, a mean average of 85.6/100, and a trimmed mean (excluding outliers) of 86.9/100. The standard deviation for this album is 15.7.

One of the coolest, most impressive double albums of all time. I still feel I under-appreciate this album way more than it deserves and also deserves more of my time. The influence this album has had on the likes of The Libertines is incredible.

6.94 out of 10.0
The excellent opening song is one of the most fantastic starts to an album. But everything sounded so repetitive or identical. Seems overrated in a good way. It is coming from someone who doesn't like Rolling Stones but loves The Beatles or Pink Floyd.

When I was 15 years old and learning how to play guitar, my high school friends and I tried to start a band so that the bassist could impress a girl. We played "Train in Vain" at a talent show, and it totally opened my eyes to a type of music that I didn't know I would love so much.

The Clash have a great ability to vary musical styles without it seeming trite or forced. Witness the saxophone on The Right Profile or the piano on The Card Cheat. It feels like the same band throughout, one who can comfortably live in many different pockets.

There’s an urgency to Joe Strummer’s vocals and lyrics, such that one has the sense of this being an album trying to say something of importance, even if the listener is 40+ years and half a world away.

London Calling holds up extremely well. A few songs shorter and this would be damn near perfect.

Greatest Album Ever! Music is awesome, lyrics is awesome. entire album is brilliant!

When i first got this album as a teen, i bought it absurdly cheap (to the point where i actually still feel bad about it) from a yard sale whose owner probably had a son in college and didnt really know any better.
At the time i also didnt know any better it just looked cool and i somehow recognized the name and knew the title track. Still the thought of listening to a double album of punk music seemed daunting.
However that side A destroyed all the barriers i had built previously, I didint know punk could sound so varied or even that it could be as catchy as this.
Returns diminish from side B onwards (none of them are bad however),
Finally I had something to talk to the punk kids about. They, obviously and apropriately couldnt care less lol

Bought this the day it came out in Dec '79. Loved it from the first. All side one tracks are exemplary. The quality drops slightly [but only slightly] for sides two and three. Side four is the weakest in my opinion [Lovers Rock & Revolution Rock] however that is only because the standards of the others are so high. The Clash retained some of the Punk on this LP, but also pointed the way to Sandinista and Combat Rock. Such a shame they split as they had already done that difficult crossover to survive and the future could have been long and great for all of us. Got to mention the Inner Sleeves which I thought were brilliant. Definitely The Clash's best LP.

Your feedback for London Calling