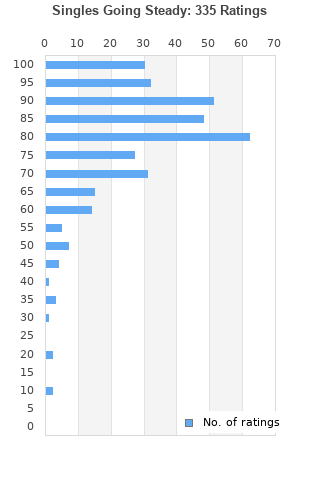 BUZZCOCKS - SINGLES GOING STEADY - 12" VINYL LP- LIBERTY LIB1043 - NEAR MINT
Condition: Used
Time left: 19h 21m 1s
Ships to: Worldwide
£21.00
Go to store
Product prices and availability are accurate as of the date indicated and are subject to change. Any price and availability information displayed on the linked website at the time of purchase will apply to the purchase of this product.  See full search results on eBay

Singles Going Steady is ranked as the best album by Buzzcocks. 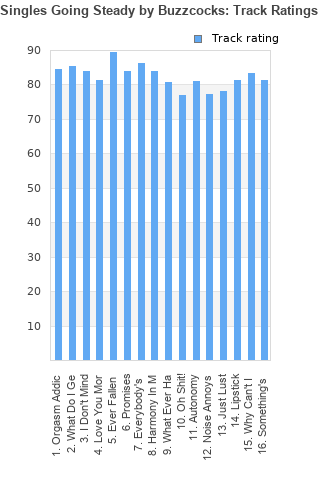 Rating metrics: Outliers can be removed when calculating a mean average to dampen the effects of ratings outside the normal distribution. This figure is provided as the trimmed mean. A high standard deviation can be legitimate, but can sometimes indicate 'gaming' is occurring. Consider a simplified example* of an item receiving ratings of 100, 50, & 0. The mean average rating would be 50. However, ratings of 55, 50 & 45 could also result in the same average. The second average might be more trusted because there is more consensus around a particular rating (a lower deviation).
(*In practice, some albums can have several thousand ratings)
This album is rated in the top 2% of all albums on BestEverAlbums.com. This album has a Bayesian average rating of 80.7/100, a mean average of 79.7/100, and a trimmed mean (excluding outliers) of 81.0/100. The standard deviation for this album is 16.1.

Great collection of punk songs with a little bit of a power pop edge. Still prefer The Clash's self-titled to this, but this is enjoyable in its worst moments and pretty great at its best.

I almost certainly would have appreciated this more as a 14-year-old.

Really good comp. Standouts: Ever Fallen In Love?, Lipstick, and Why Can't I Touch It?

A lot of the Buzzcocks best stuff was their singles, so this compilation is essential

The best compilation album, along with New Order(substance) made.....
An essential, because nearly every song was never recorded on any
Studio album. Overall I dislike greatest hits albums, unless you like a
Handful of songs from the particular artist.
This album is a big exception to that rule. Early, influential punk, classic alt.
At its finest.

It was years later after discovering this album that I found out it was a compilation. That in itself shows how well these tracks blend in together. This is the only compilation album I will ever have ranked in any of my charts

Yes, you can say this is a compilation, but I consider it their best album as a majority of their singles never landed on a proper album. Great, tuneful punk rock with a lick of attitude.

Your feedback for Singles Going Steady