Armed Forces (studio album) by Elvis Costello And The Attractions 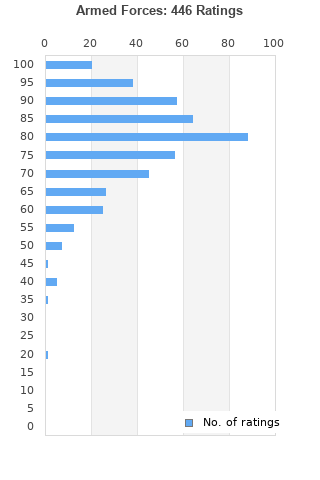 Armed Forces is ranked 3rd best out of 12 albums by Elvis Costello And The Attractions on BestEverAlbums.com.

The best album by Elvis Costello And The Attractions is Imperial Bedroom which is ranked number 833 in the list of all-time albums with a total rank score of 2,212. 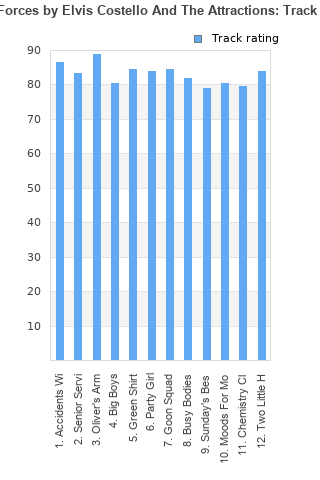 Rating metrics: Outliers can be removed when calculating a mean average to dampen the effects of ratings outside the normal distribution. This figure is provided as the trimmed mean. A high standard deviation can be legitimate, but can sometimes indicate 'gaming' is occurring. Consider a simplified example* of an item receiving ratings of 100, 50, & 0. The mean average rating would be 50. However, ratings of 55, 50 & 45 could also result in the same average. The second average might be more trusted because there is more consensus around a particular rating (a lower deviation).
(*In practice, some albums can have several thousand ratings)
This album is rated in the top 2% of all albums on BestEverAlbums.com. This album has a Bayesian average rating of 79.3/100, a mean average of 78.8/100, and a trimmed mean (excluding outliers) of 79.5/100. The standard deviation for this album is 12.9.

There is so much filler content on this record and the album only has 2 or 3 great songs and the rest just fade into the background. The ones that always stand out to me are Oliver's Army and Accidents Will Happen. Both are classic Costello with his infectious voice dominating the tracks and the Attractions putting in a fantastic performance in backing him up. These two songs are so energetic and catchy and this makes the dramatic fall off of the record feel even worse. Basically every song except the two I mentioned are filler and provide nothing to the record. You could skip those songs and I don't think anyone would be missing out on anything. None of the songs are bad but they just do nothing and don't really have that charm and infectious nature we are used to with Costello. Overall, this was quite a disappointing record for me as Costello has shown he can create brilliant music but he doesn't show it on here.

Not as good as his previous records, but still very strong album.

Accidents Will Happen, Oliver's Army and Goon Squad are great tracks, the rest are mediocre at best.

This is the weakest of Costello's run of albums from his debut to 1982's Imperial Bedroom. This is somewhat of an unpopular opinion, and there was a time when I would have disagreed with anyone who held it. But, it is hard to deny that it sounds a bit dated, and after the first five songs, which are ridiculously strong, I find myself less enamored with the others (except Little Hitlers, which I think is a fine closer). Still a great album - at this point Costello was incapable of making anything less - but not one of my favourites.

My first Elvis Costello album. Really, really good all the way through. Songs are good or great.

Definitely some of Elvis Costello's best songs, but they're not all great.

Tracks range from being good to outstanding. Not a single bad track here, even though other works of his, like ''this year's model'' are just a bit more constistant. Still, 85/100 from me.

@jackbrown8786 This is the original LP cover. The US version and some CD reissues have the paint splatter sleeve.

Your feedback for Armed Forces