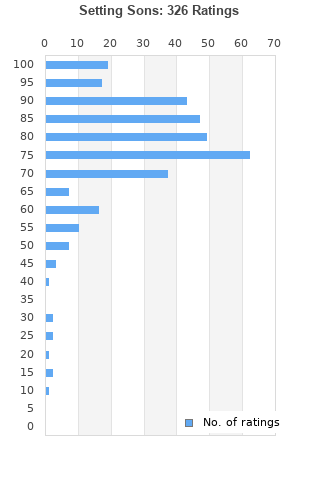 Setting Sons is ranked 3rd best out of 21 albums by The Jam on BestEverAlbums.com.

The best album by The Jam is All Mod Cons which is ranked number 719 in the list of all-time albums with a total rank score of 2,567. 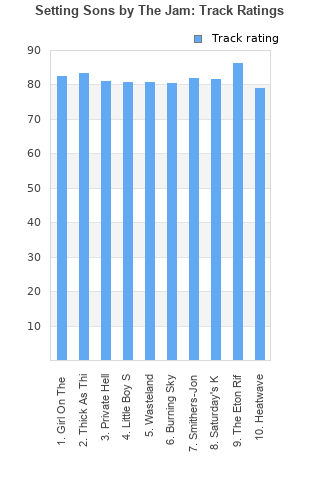 Rating metrics: Outliers can be removed when calculating a mean average to dampen the effects of ratings outside the normal distribution. This figure is provided as the trimmed mean. A high standard deviation can be legitimate, but can sometimes indicate 'gaming' is occurring. Consider a simplified example* of an item receiving ratings of 100, 50, & 0. The mean average rating would be 50. However, ratings of 55, 50 & 45 could also result in the same average. The second average might be more trusted because there is more consensus around a particular rating (a lower deviation).
(*In practice, some albums can have several thousand ratings)
This album is rated in the top 2% of all albums on BestEverAlbums.com. This album has a Bayesian average rating of 78.6/100, a mean average of 77.4/100, and a trimmed mean (excluding outliers) of 78.8/100. The standard deviation for this album is 15.0.

Would be 10/10 had they not lazily tagged the Heatwave cover on the end. Doesn't fit in with rest of the album imo. The rest is brilliant

It's maybe unpopular opinion, but I actually like this album more than All Mod Cons. They evolved from simple new wave to more interesting and inntriguing songs for me.

There are quite a few great song on this release and the energy of the group is perfect. Songs like Thick As Thieves and Little Boy soldier are brilliant and I always sing a long when I hear them. Then there is The Eton Rifles which is a thrilling listen. All of these songs and a few more have fantastic instrumental performances with a very diverse ensemble as well. Wellers vocal is great due to it being monotone yet can also easily display a vast emotional range. The lyrics are fun to explore as well and are generally well written. However, I am not a fan of the cover that closes the album out and I think it is a weak cut. Alongside this, there are a few other pretty average songs which struggle to keep me entertained. Furthermore, I am quite tired of their style by the closing tracks as well as they are quite repetitive in terms of their sound. Overall, there are lots of moments to enjoy on here and also moments that are pretty average or bad but I do enjoy revisiting this record when I do.

The timing of this release was absolutely perfect, lyrically superb. I would have prefereed another Weller composition instead of Heatwave and I prefer the guitar version of Smithers-Jones but they are minor grumbles

The peak of Weller's career as a songwriter and lyricist, though it's not as enjoyable of a listen as some of the other Jam albums. Side one is okay, but doesn't do much for me. Then the run from "Burning Sky" to "Eton Rifles" is four terrific songs, one after another, the most consistent stretch of good material on any Jam album. I don't understand the criticism of "Heatwave" here - it's an adequate cover of a great song, and while it lacks the spontaneity of The Who's version, at least they used the correct words here.

A mod album that passes an political message at the UK state of the moment.

Stunning album. Articulate, biting social commentary and a brilliant distillation of what was going on in England at the time. Thinking mans music par excellence

Takes getting used to, but grows on you quick. Really good music. Good pop rock.

Name a bad song on this classic album .... ok maybe the heat wave remake. But otherwise but from the moment the phone rings on the
Opening track, it is awesome .... should definately be in top 500.

The second of The Jam's three masterpieces, setting sons, is a rip roaring record full of energy and great songs. The Who influences are still there but they sound more and more like themselves with each release. The album starts frantically with the three song blitz of, girl on the phone, thick as thieves, and, private hell. Other highlights include, Smithers-Jones, a wonderful song from Bruce Foxton, and the superb, Eton rifles. Another excellent album then from The Jam.

Your feedback for Setting Sons