Off The Wall (studio album) by Michael Jackson 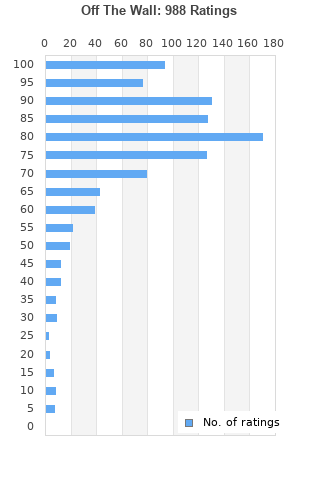 Off The Wall is ranked 2nd best out of 24 albums by Michael Jackson on BestEverAlbums.com.

The best album by Michael Jackson is Thriller which is ranked number 79 in the list of all-time albums with a total rank score of 18,023. 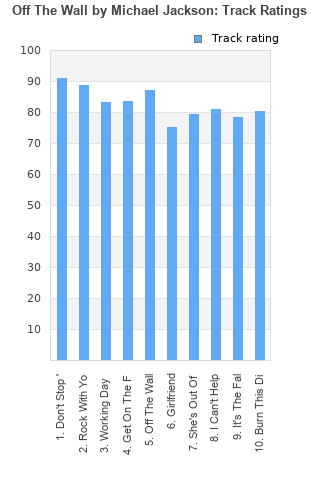 Off The Wall rankings

Off The Wall collection

Off The Wall ratings

Rating metrics: Outliers can be removed when calculating a mean average to dampen the effects of ratings outside the normal distribution. This figure is provided as the trimmed mean. A high standard deviation can be legitimate, but can sometimes indicate 'gaming' is occurring. Consider a simplified example* of an item receiving ratings of 100, 50, & 0. The mean average rating would be 50. However, ratings of 55, 50 & 45 could also result in the same average. The second average might be more trusted because there is more consensus around a particular rating (a lower deviation).
(*In practice, some albums can have several thousand ratings)
This album is rated in the top 2% of all albums on BestEverAlbums.com. This album has a Bayesian average rating of 79.1/100, a mean average of 77.6/100, and a trimmed mean (excluding outliers) of 79.1/100. The standard deviation for this album is 18.0.

Off The Wall favourites

Off The Wall comments

The first half of this record is great funky pop which showcases Michael's potential, but the whole album is inconsistent.

Doesn't hit the heights of Thriller or Bad for me, but still some nice dance tracks. My favourites are Don't Stop Til You Get Enough, Off the Wall and Can't Help It.

My favorite MJ album, Just so special and original. In 1979 this was the best album for a DJ:s night

Hands down one of my favourite of Michael Jackson albums. The album is fire and magical. Very black and groovy, really MJ was happy doing this album like Thriller. From the black groovy song Don’t Stop Til You Get Enough to the slow song She’s Out Of My Life. Off The Wall needs more love because really it’s underrated in the MJ fandom. It’s a groovy kind of album perfect for a Disco or party unlike his later albums mainly History and Invincible doesn’t have dance songs or groovy songs not even Scream or 2Bad or You Rock My World count. The songs are fire, the videos are amazing, She’s Out Of My Life filmed on one take, Rock With You and the sparkly outfit and Don’t Stop Til You Get Enough and the dancing. Very iconic album one of his best musically along with Thriller.


Don’t Stop Til You Get Enough is a iconic tune. Very black disco song, perfect for a party and disco and the video was fire. Never will I get tired of the song or video ever. Iconic tune 10/10

Rock With You is another iconic song. The song has a nice feeling and you could feel how happy he was and it’s so groovy. A classic R&B/Disco song, perfect for a party and the video is fire, with a little dancing, outfit and singing. 10/10

Workin Day N Night is a banger. That tune has a groovy beat in it, and you could tell he had a lot of fun doing his song, very classic never aged. 10/10

Get On The Floor a cool song. Even though I haven’t listen to it that much it’s catchy and worth to listen to it. Nice tune and the best is amazing. 8/10

Off The Wall another iconic song. The song is fun, fun to sing to, fun to dance to. This song has a nice R&B/Disco vibe to it. 10/10

She’s Out Of My Life is classic. It’s so underrated it needs love. The video is always left off when it comes to Michael Jackson videos, it’s amazing, filmed in one take, the Curl and jumper with the purple shirt in it is iconic. Looks like a gentleman, he was, so yeah. The song is a nice Soul song, he put his heart out to it even though he was sad when he sang it. 10/10

Girlfriend iconic one. The song has a nice R&B/Soul feeling, he sounds so happy, it’s just a banger. Needs more love cause that song is amazing. Wonderful and soulful. 9/10

I Cant Help It is a classic tune. Timeless tune, nice R&B/Soul vibe, never gets old this song needs more love. Looks like he had fun doing. He seems very happy in this album as well as he was in Thriller which he hardly was in his later albums. People need to give this song more love and appreciation, it’s a masterpiece.10/10

It’s The Fallin In Love classic one. This song is catchy although I didn’t listen to it for a while, it’s worth to sing it also to dance along to it. 9/10

Burn This Disco Out is amazing. Groovy tune, worth to dance to and got a Disco vibe to it, it’s so awesome for a party, you all need to give this song more love, he sounds so happy in it, very black R&B. 9/10

The first masterpiece of Michael Jackson. It’s a consistant album that established him as an artist with astonishing talent.
Don’t Stop ‘Til You Get Enough and Rock With You are still among the most acclaimed songs of all time.
But the whole album is cohesive, even my 2 least favourites ‘Girlfriend’ and ‘Burn This Disco Out’.
He proved 3 years later that he could top it. 9.5/10

A decent foreshadowing of the solo heights that were to come a few years later.

Your feedback for Off The Wall