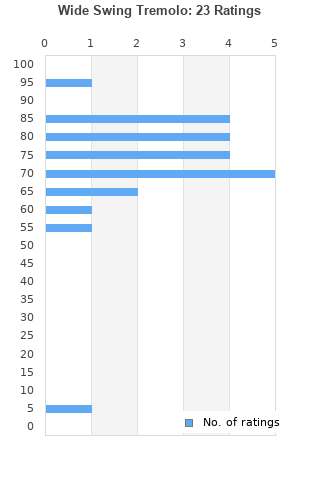 Wide Swing Tremolo by Son Volt (CD, 1998, Warner Bros.)
Condition: Very Good
Time left: 2d 17h 31m
Ships to: Worldwide
$4.25
Go to store
Product prices and availability are accurate as of the date indicated and are subject to change. Any price and availability information displayed on the linked website at the time of purchase will apply to the purchase of this product.  See full search results on eBay

Wide Swing Tremolo is ranked 4th best out of 10 albums by Son Volt on BestEverAlbums.com.

The best album by Son Volt is Trace which is ranked number 1458 in the list of all-time albums with a total rank score of 1,215. 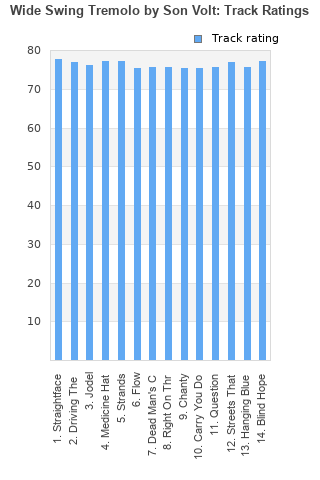 Rating metrics: Outliers can be removed when calculating a mean average to dampen the effects of ratings outside the normal distribution. This figure is provided as the trimmed mean. A high standard deviation can be legitimate, but can sometimes indicate 'gaming' is occurring. Consider a simplified example* of an item receiving ratings of 100, 50, & 0. The mean average rating would be 50. However, ratings of 55, 50 & 45 could also result in the same average. The second average might be more trusted because there is more consensus around a particular rating (a lower deviation).
(*In practice, some albums can have several thousand ratings)
This album has a Bayesian average rating of 74.2/100, a mean average of 71.1/100, and a trimmed mean (excluding outliers) of 74.7/100. The standard deviation for this album is 18.3.

A few more ideas here, building on what they did with Trace & missed with Straightaways, but still stalling out.

Wide Swing Tremolo completes the trilogy of Son Volt's 90's catalog. The band went on hiatus soon after and never quite captured the sound and quality they achieved on their first three records.

This one's a bit of a mix and match of songs that don't bundle well together, but it is still an very enjoyable record for someone interested in folk and Americana music.

Track Pick: "Right on Through"

Heavy on Dave Boquist's slide guitar and Mike Heidorn's steady drumming, this album was at the pinnacle of Son Volt's career as one of the great alt-country bands. The mind behind all this was of course Jay Farrar, whose songwriting and arrangements here are impeccable, especially the sideview-mirror thumping road rocker "Driving the View."

Son Volt's third and final album before Jay Farrar put the band on a 7 year hiatus. Not as good as their first, of course, but it's still got that classic Son Volt sound, especially on the first 4 tracks (not counting whatever the hell "Jodel" is supposed to be).

A pretty average album from a band capable of much more.

Your feedback for Wide Swing Tremolo