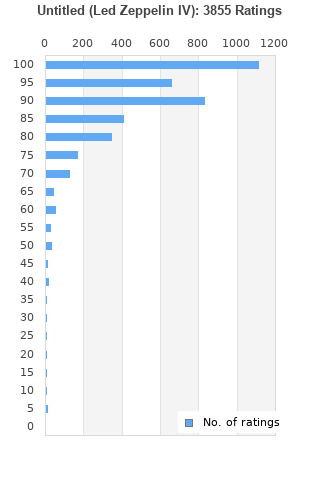 Untitled (Led Zeppelin IV) is ranked as the best album by Led Zeppelin. 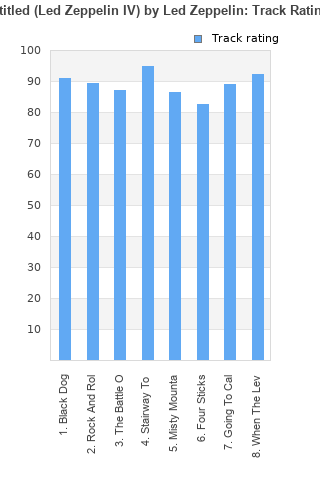 Rating metrics: Outliers can be removed when calculating a mean average to dampen the effects of ratings outside the normal distribution. This figure is provided as the trimmed mean. A high standard deviation can be legitimate, but can sometimes indicate 'gaming' is occurring. Consider a simplified example* of an item receiving ratings of 100, 50, & 0. The mean average rating would be 50. However, ratings of 55, 50 & 45 could also result in the same average. The second average might be more trusted because there is more consensus around a particular rating (a lower deviation).
(*In practice, some albums can have several thousand ratings)
This album is rated in the top 1% of all albums on BestEverAlbums.com. This album has a Bayesian average rating of 89.8/100, a mean average of 88.7/100, and a trimmed mean (excluding outliers) of 89.8/100. The standard deviation for this album is 13.3.

This collection of songs would be too good even for a compilation, yet it's an actual album. Amazing!

Its a very good album. Led zeppelin is just not for me

Nothing goes as hard as this, filled with songs that could be other band's best.
except Four Sticks though, it's decent.

Ok, lets be honest and go straight to the point. This album is almost perfect but..... There is a song call Four Sticks, which is easly one of the worst Zeppelin songs ever. Who wants to listen to that repettive riff for 5 minutes? It is by far the weakest song on the album, I always skip that one.

Then there are some lyrics that are really kind of embarrasing. And I also dont like that some songs are just too long.

But it is a masterpiece, despite including that bad song. I mean it doenst get much better than having Black Dog, Rock and Roll And Stairway, all in one album.