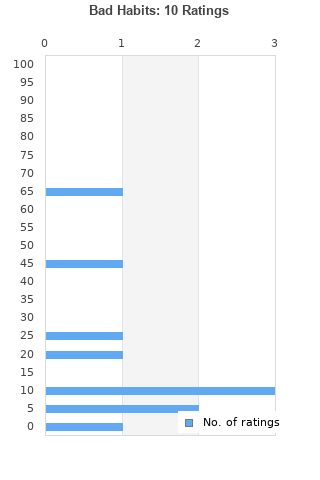 Bad Habits is ranked - best out of 5 albums by Nav on BestEverAlbums.com.

The best album by Nav is No album found which is ranked number 0 in the list of all-time albums with a total rank score of 0. 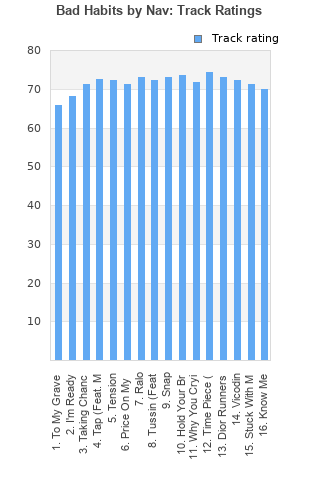 I only got through four songs. I tried. It's just boring

I can tell you that I was not looking forward to this album. The only studio album of NAV, "Reckless", was immediately forgotten. As expected, the retirement speech was just a buzz for a second studio album, "Bad Habits," but the music here is so empty that you wonder if NAV would have done better to stay at home. The flow is the same, the lyrics are extremely void and the prods are repetitive and uninteresting. Even my favorite song, " Why You Crying Mama" is pretty ridiculous. Aside from a few catchy moments, NAV releases a hollow album that is really scary about the future of the artist.

For the most part Bad Habits is just a pretty uninteresting rap album with a few misfires, but these misfires stand out as being pretty funny by entering into whole new levels of terrible. These include Nav talking about letting a girl see his jewellery and then feeling panicked when she doesn't immediately give them back. Whoever's doing the high pitched singing on 'Price on my Head' has created one of the worst sounds I've ever heard. Young Thug mentions his sexual attraction to his aunt. On 'Tap' Nav rhymes the words cage, slave, behave and say, on paper this isn't perfect but seems like it should work well enough but inexplicably he pronounces all 4 words with an "ee" sounds so they come out as key, sleeve, beheeve and see. Aside from these the similarity of Nav's voice and the beats will wear you down by about halfway through. An anti lesbian slur also appears later in the album, I've heard it a lot more frequently in hip hop lately and I'm not sure why it can't be left in the past like some other homophobic slurs that the rap community has all but eliminated in recent years.

Your feedback for Bad Habits