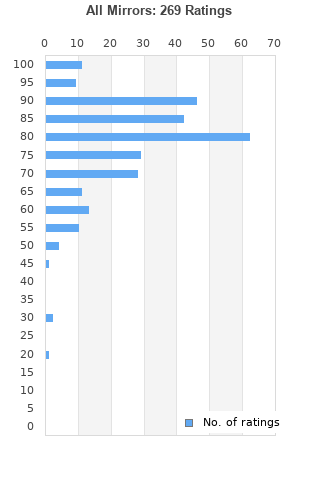 All Mirrors is ranked 2nd best out of 11 albums by Angel Olsen on BestEverAlbums.com.

The best album by Angel Olsen is My Woman which is ranked number 733 in the list of all-time albums with a total rank score of 2,508. 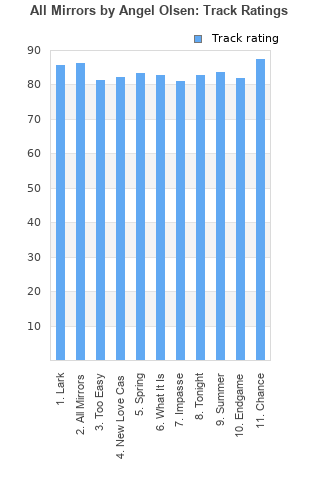 Rating metrics: Outliers can be removed when calculating a mean average to dampen the effects of ratings outside the normal distribution. This figure is provided as the trimmed mean. A high standard deviation can be legitimate, but can sometimes indicate 'gaming' is occurring. Consider a simplified example* of an item receiving ratings of 100, 50, & 0. The mean average rating would be 50. However, ratings of 55, 50 & 45 could also result in the same average. The second average might be more trusted because there is more consensus around a particular rating (a lower deviation).
(*In practice, some albums can have several thousand ratings)
This album is rated in the top 2% of all albums on BestEverAlbums.com. This album has a Bayesian average rating of 79.1/100, a mean average of 78.7/100, and a trimmed mean (excluding outliers) of 79.4/100. The standard deviation for this album is 12.4.

Good album, but a bit overrated I would say.

While I enjoyed My Woman I don't think I loved it as much as other people. This album however is one I am obsessed with. This is the first album of hers I have really fallen for. "All Mirrors" and "Chance" are the two songs that stick out and probably among the best of 2019 and of the decade.

Strong in the beginning and especially the end. A bit of a lull in the middle. Great vocals. Good songwriting.

Beautiful transition from the indie rock of stunning "My Woman" to this dense yet elegant barroque pop. The album is solid, consistent and enjoyable as a whole, with clear peaks in "Lark", "All Mirrors", "Impasse" or "Chance", but I'm obsessed with some of the minor tracks as well. The 2010s were the decade of the women and Angel Olsen is one of the most remarkable characters, All Mirrors is a confirmation of a brilliant career.

I’ve been a A.O fan and followed her career closely since “Burn You’re Fire ..” knocked me out in 2014 so course I adore this album and think it’s one of 2019’s very best

What more can I say ? She’s getting better with each release

Yeah now a few times through I don't think my opinion has changed much. The first half of this album really doesn't do much for me at all, with the admittedly well-crafted but overbearing compositions seem to be pushing Angel herself into the background a bit rather than augmenting her performance... with tracks like Lark, the Burn Your Fire cast-off reimagined as Hval-esque art-synth-pop All Mirrors and the vaguely Father John Misty-ish Too Easy & New Love Cassette sounding great in theory but don't really have much impact on actual record. The second half really does redeem the album, though, where I think the arrangements and Angel herself really finally get into a more symbiotic groove and the more personal, intimate side of her songs start to finally come out with much more gusto than before. But it's hard to fall in love with a full record when I pretty much only play half of it on repeat (and "Spring", which is pleasent and catchy enough), which is kind of the opposite of "My Woman" which had more intentionally contrasting sides to the record that played off each other really well. So enough to definitely reccomend it, but can't deny it's still a bit dissapointing after all's said and done.

Your feedback for All Mirrors