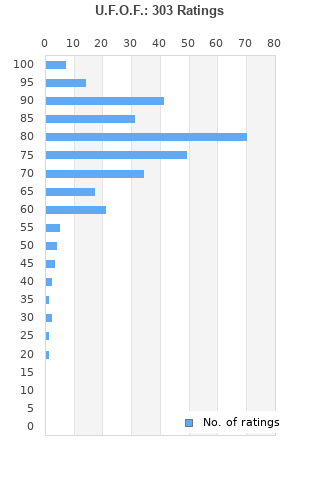 U.F.O.F. is ranked as the best album by Big Thief. 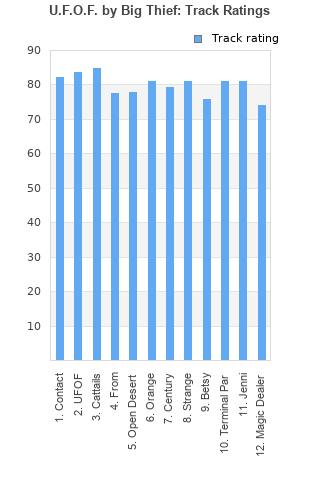 Rating metrics: Outliers can be removed when calculating a mean average to dampen the effects of ratings outside the normal distribution. This figure is provided as the trimmed mean. A high standard deviation can be legitimate, but can sometimes indicate 'gaming' is occurring. Consider a simplified example* of an item receiving ratings of 100, 50, & 0. The mean average rating would be 50. However, ratings of 55, 50 & 45 could also result in the same average. The second average might be more trusted because there is more consensus around a particular rating (a lower deviation).
(*In practice, some albums can have several thousand ratings)
This album is rated in the top 4% of all albums on BestEverAlbums.com. This album has a Bayesian average rating of 77.5/100, a mean average of 77.0/100, and a trimmed mean (excluding outliers) of 77.7/100. The standard deviation for this album is 12.9.

On this album, so much comes together for Big Thief. The whole sound that they had hinted at for 2 albums earlier seem to coalesce. The production is more amazing than ever. The songwriting has moments of transcendent beauty. The sound of the group gets more strange and hard to pin down. They still have that Indie Folk meets Indie Rock sound, sure, but there are elements of experimentation that sort of bleed in and out, as well as some cool almost mathy or American Football-ish guitar work, some truly excellent and detailed drum work, and overall this album is a feast for the ears when I listen with high volume and nice headphones.

It should be said that the opening track here is BY FAR the standout song here. Not to say that other tracks aren’t great, because some are, but “Contact” is for me on a whole new level of stunning. The Big Thief model seems to be for their opening track to be low-key and kind of morose or contemplative and almost without fail the opener isn’t a highlight for me. That trend seems to be continuing with their upcoming new 2022 album. So, the fact that this album starts with such a masterpiece is surprising and appreciated. From the nocturnal, mesmerizing, hazy first 2 minutes with that groove and those lyrics which are so gorgeous, all the way to that explosive and truly towering and impactful final minute or so of guttural screaming mixed with that emotive and huge rock guitar, this whole song is stunning and in the running for best song of the decade. Adore it.

After that there is a winning streak this album goes on from the incredibly comforting title track, to the pastoral and blissful third track “Cattails”, to the rework on the song that was already a standout on Lenker’s previous solo album, “From”, but now with more of that gorgeous and detailed drum work and the production here that is uniformly immersive, this song levels up here in Big Thief-form. And then track 5 is a beautiful, tender, whispery almost slowcore-influenced track called “Open Desert” which is fabulous.

I will say that the personal love of the album does not maintain this same level of mastery, otherwise this would be a nearly 10/10 classic. That is not to say I don’t really like the second half. But from track 6 through to track 12 I feel like my ears are left less satiated than they were with the first 5 songs. Still it is here in the second half when the vocals get a bit changed up and there are some really beautiful stripped down confessional folk songs (“Orange”) and almost airy and care-free rock tracks (“Century”) and its all at least good stuff still featuring the best production yet on any Big Thief record as well as some badass venturing into new musical territories. It feels like with this first album of 2019, Big Thief just broke loose from any sort of self-imposed limitations on what kind of music they wanted to make. The subject matters are mostly less visceral and brutal than what was on Capacity, and they jams are less clearly rocking and traditional than on their debut. And they just go where they want and where they want is almost all good stuff.

The stand out for me of the last 7 tracks is another re-work of a solo Adrianne Lenker song from her previous album. It’s called “Terminal Paradise” and in this more fleshed out and richly produced and chiseled form this song is a stunner and one of the most beautiful songs Big Thief have ever made. The vocals alone are so moving and show off that Lenker is indeed one of the better vocalists around (in my opinion anyway) and she has a lot of range as well. For an example of range listen to the cool, kind of sexy and swaggering vocals on “Century” and then the sort of deeper register of “Betsy” and then the soaring high pitched majesty of “Terminal Paradise”. She is a gem, this Adrianne Lenker.

I don’t have much else to say except that this album hasn’t captured my whole soul for a week straight like Capacity did despite having 2 or 3 songs which are tops in my Big Thief song rankings. I can hear the freedom and looseness of the band here and it’s a great sound. The result may be a bit less consistency and a bit less of a perfect flow as an album than their first couple albums. Still any album with “Contact” is going to be a fucking gem of a record. And add to that the mastery on display on “UFOF”, “Cattails”, “From”, “Open Desert”, “Terminal Paradise” and, to slightly lesser degree, “Magic Dealer”, “Orange”, “Betsy”, “Strange”, etc etc… yeah this is a great album and continues their winning streak alive and well.

not bad, not awesome, just playing safe, the production could be better, i hope they innovate a little more

Don't get me wrong, she has a great voice and they have some impressive tracks. But I would wish for more variation in their sounds.

This is a very nice sounding album. Though I don't know what all of the songs are about, it's still enjoyable to listen to the vocals and the guitars. Speaking of guitars, I have nothing but praise for the acoustics but there are points featuring the electric guitar on the album that leave me scratching my head. I'm not sure what's up with the solo on "Jenni". It sounds like a single note played like 60 times to my untrained ear. I do think that the electric makes "Contact", though, and it's my favorite song on the record. Nothing else felt better than good to me.

I love Big Thief so naturally I am immediately drawn to this mellow low key album however over all it feels more like a Adrianne Lenker solo album rather than a fully fleshed BT collaboration especially with 2 tracks included here from Adrianne’s 2018 solo album. What’s with that?

In logical progression building on previous efforts, Big Thief strip their sound down to the fundamental, emotional roots, with a series of tracks that revolve around circular acoustic guitar arpeggios and tender, breathy vocals. This time around, more textural experimentation and tasteful studio trickery is spooned on for good measure. The choruses are wide open and gorgeous, they sound like licks of sunlight piercing through clouds on a rainy day - verses are juxtoposingly shivering and anxious. The tracks are more compact here and burn slower, this album is definitely a grower. Excited to hear this is supposedly one of two albums to come this year.

Lulls a little in the middle, but it's still yet another solid album from the Brooklyn quartet, if not a quieter and more somber collection than their previous efforts.
I'm not exaggerating when I say I truly think Adrianne Lenker is one of the most talented and consistent songwriters in music today, and if you listen to tracks like "Cattails", "Orange" or "Terminal Paradise" (which previously appeared on her solo record, Abysskiss from last year) then you'll see why.

Inevitable Feist comparisons aside, this is a lovely record to listen to. One of the best of the year so far.

Mysterious, spacious but still immediately engaging. Nothing that smacks you across the face upon first listen, but keeps expanding little by little with each listen- the most fully realized and atmospheric musical universe of the year. Divine, just don't expect a first-listen knockout.