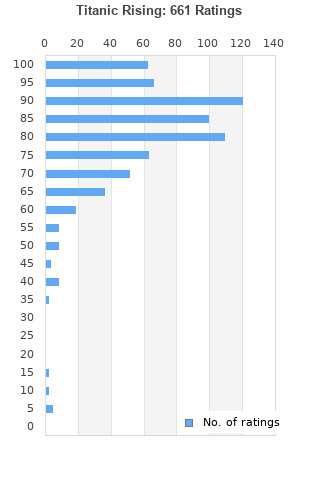 WEYES BLOOD Titanic Rising LP SEALED Sub Pop indie-pop
Condition: New
Time left: 2d 15h 41m 34s
Ships to: Worldwide
$18.99
Go to store
Product prices and availability are accurate as of the date indicated and are subject to change. Any price and availability information displayed on the linked website at the time of purchase will apply to the purchase of this product.  See full search results on eBay

Titanic Rising is ranked as the best album by Weyes Blood. 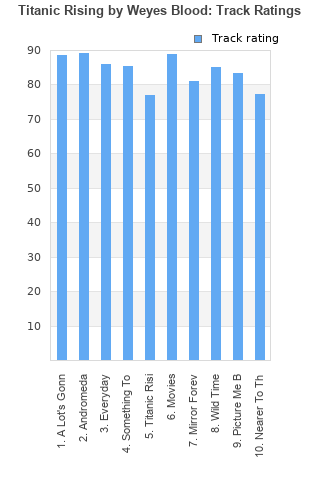 Rating metrics: Outliers can be removed when calculating a mean average to dampen the effects of ratings outside the normal distribution. This figure is provided as the trimmed mean. A high standard deviation can be legitimate, but can sometimes indicate 'gaming' is occurring. Consider a simplified example* of an item receiving ratings of 100, 50, & 0. The mean average rating would be 50. However, ratings of 55, 50 & 45 could also result in the same average. The second average might be more trusted because there is more consensus around a particular rating (a lower deviation).
(*In practice, some albums can have several thousand ratings)
This album is rated in the top 1% of all albums on BestEverAlbums.com. This album has a Bayesian average rating of 81.9/100, a mean average of 81.3/100, and a trimmed mean (excluding outliers) of 82.1/100. The standard deviation for this album is 14.2.

One of the most beautiful albums I have ever heard. It's unbelievable how much passion Weyes Blood displays throughout. It's as though she lets go of everything holding her back and isn't afraid to put every nuance of emotion and vulnerability out into the open, much like Björk or Eddie Vedder, for example.

Surprisingly, not a great sounding record even though the production's good.
Andromeda is a really good song!
In what concerns influences weirdly Abba came to mind on a song like Everyday. Also her voice has an hint of Aimee Mann. Unexpected references and way poppier than I thought Weyes Blood were.
Lots of catchy melodies and even though level of craft is elevated there's always that feeling of "heard it before".
Nonetheless, a good record!

I've listened to hardly any new albums in the last couple of years and after recently buying this I fear what I may be missing. The first two tracks are absolutely stunning and it would be unfair to judge the album against those. Everything is almost perfect, brilliant songwriting and topped by the vocal which is somewhere between Karen Carpenter and Laura Marling. The only downside is the sound on the cd is slightly harsh when everything is full in the mix. This has been on repeat all weekend and if it has staying power is to be seen. A possible overall chart contender. Did in mention I love the vocal?

I guess my username kind of depicts the effect this album had on me. do I really even have to say anything about this lp? it speaks for itself. give it a whirl. yes, it gets better with time.

I love listening to this album so much, its like a storm in slow motion. And its ageing so well, every listen better than the last. There isn't enough hyperbole to describe my love for this album.

Natalie Mering is a bit of a nostalgic, in the finest way possible. This doesn't seem to be a blinding nostalgia that reflects the allure of contemporary music. This is a kind that serves as the heartbeat of her work, a tender nucleus that she builds around with expert craftsmanship (or craftwomanship). It's not hard to see what her strengths are. She wields a voice powerful enough to disrupt fault lines and agitate prospective avalanches. In short, she's a beautiful singer who's designed an album perfectly engineered around her vocal dexterity. Weyes Blood's fourth record is entitled Titanic Rising, which is fitting considering many of the tracks here call upon the past, through both Mering's personal experience and her music's sonic disposition. The result is a dreamy, aqueous take on different kinds of love, self-satisfaction and loss. The album art refers to Mering's creative subconscious from the comfort of her bedroom. The metaphor couldn't be more appropriate given that the young songstress' portrays her innermost sentiments flawlessly and with vivid explicitness on Titanic Rising.

The LP begins with A Lot's Gonna Change, a track that starts with a series of fragile piano key strikes. The track quickly escalates with the introduction of Mering's stirring voice. Her voice washes over every inkling of the track like a soothing breeze, starkly opposite of bracing drumbeats. The track finishes amongst lush backing vocals that play off of Mering's sympathies, "Let me change my words, show me where it hurts." The track exemplifies the term "grand opening" and provides a blueprint for ambitious soundscapes to follow. Second track Andromeda, the first single off of the album, sports a western-tinge blended with psychedelia, embodying equal parts Dolly Parton and Iron Butterfly. If you haven't listened to the track, please take a moment to imagine that sonic cocktail in your mind. Mering laments, "Treat me right, I'm still a good man's daughter, let me in if I break, and be quiet if I shatter." The song paints a portrait of unrealistic expectation and subsequent emotional investment. Sixth track, Movies, stands as the album's artistic centerpiece. It's also the most pioneering cut from Weyes Blood so far, submerged in synthesizer arpeggios that are just as delectable as they are alien. The vocals lacerate the wall of electronics with ease as she announces, "I'm bound to that summer, big box office hit, making love to a counterfeit." The poetry points to an endless wave of typicality when it comes to romance and a distinct longing for a love-affair fit for the silver screen. The track ends with a cello barrage capping the whimsical, serene track supported by Mering's heavenly bellows. The penultimate, Picture Me Better, is a likely candidate for the most straight-forward cut of the lot. The instrumentation is heavily stripped back incorporating pacifying strings that play shyly behind Mering's vocals. Her hair-raising falsettos quickly supplant the strings and aid the notion that she could create transfixing serenades if rendered acapella. The song itself is a poignant memorial to a friend lost to suicide's destruction. "If I could have seen you just once more, tell you how much you are adored, there's no point anymore," she details. The track winds down into a final instrumental entitled Nearer to Thee, a reference to the final song played during the demise of the unsinkable ship.

Titanic Rising's artistic vision is crystalline and unalloyed. The thematic framework is a thunderous damnation of monotony and all things ordinary relating to modern life and romance. It's a testament to the artist's admiration of true love in its purest form. Furthermore, the album is a musical mission statement pleading the listener to refuse social conventionality. As emotional as the record is, it's also a vehemently liberating experience. Much of its power is drawn from the sun-dwarfing brightness of its vocal standard-bearer. These tracks are crafted around Natalie's Mering's voice as opposed to common music-making methodology. After all, a traditional approach would just be too run-of-the-mill for Weyes Blood. We can thank her ambition, emotional insight and angelic vocal register for her ever-growing collection of winsome work.

"Lost and tangled up in you,
Everyone knows you just did what you had to,
Burning much more than ever before,
Burning down the door,
It's a wild time to be alive."

I liked listen to this album (that tops the album chart of 2019), but it didn't really raised to my expectations.

So happy to see this album peaking the 2019 charts. Laura Nyro meets Karen Carpenter before Skip Spence enters the room bringing some psychedelic mushrooms to the party. Everything occurs underwater on the bottom of the ocean. Timeless music. Natalie Mering is the biggest talent we've heard in many years. Lana del who?

Your feedback for Titanic Rising