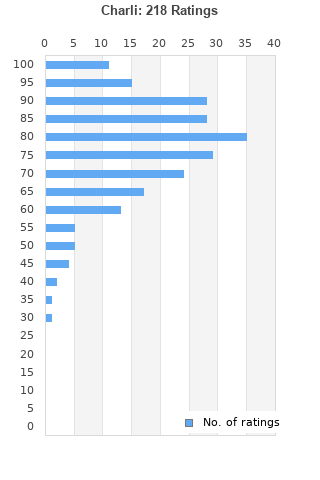 Charli is ranked as the best album by Charli XCX. 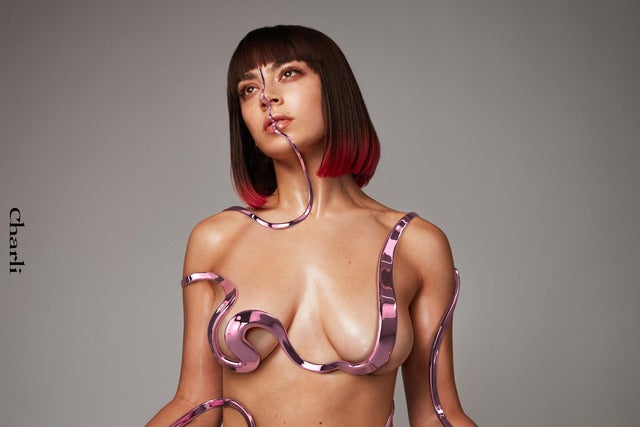 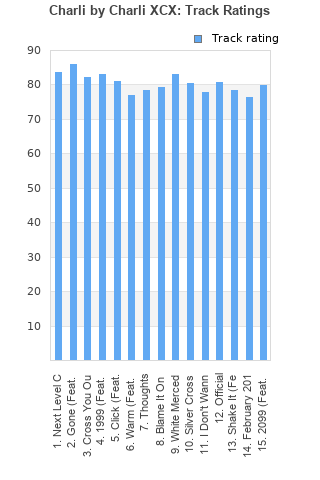 Rating metrics: Outliers can be removed when calculating a mean average to dampen the effects of ratings outside the normal distribution. This figure is provided as the trimmed mean. A high standard deviation can be legitimate, but can sometimes indicate 'gaming' is occurring. Consider a simplified example* of an item receiving ratings of 100, 50, & 0. The mean average rating would be 50. However, ratings of 55, 50 & 45 could also result in the same average. The second average might be more trusted because there is more consensus around a particular rating (a lower deviation).
(*In practice, some albums can have several thousand ratings)
This album is rated in the top 4% of all albums on BestEverAlbums.com. This album has a Bayesian average rating of 77.3/100, a mean average of 77.2/100, and a trimmed mean (excluding outliers) of 77.5/100. The standard deviation for this album is 14.1.

This album is a breath of fresh air and sounds so clean when you listen to it. This is mainly due to the slick production which makes the album such a smooth listen. They then add some extremely catchy pop hooks and a fantastic vocal performance from Charli and that culminates in this fantastic glitch pop record. It is so catchy and infectious that it gets wedged into your brain no matter whether you like it or not. Also, it is very complex in places and gives you a lot to sink your teeth into when you look past the top layer of the tracks and has some great beats on the harsher tracks. I think the album opener is a perfect start to this release as well and it always gets me hyped for what I am about to hear. However, there are a few weak tracks on this album that hold it back with one of them being Shake It amongst other songs near the albums conclusion that drag it down. I am not a huge fan of some of the features as well and think the record would be superior if you cut some of them or if it was a Charli solo album. Overall, a brilliantly dreamy pop album that really challenges modern music and separates Charli as one of the best of the bunch.

greatest pop album of all time

Incredible record by Charli, she mastered this glitch pop style. So many great tracks such as cross you out, click, blame it on your love and thoughts.

Best: Next Level Charli, Gone, Cross You Out, White Mercedes, Shake It, February 2017
Worst: Blame It On Your Love

Not a bad album, but also not great in my opinion. Best track White Mercedes.

The tunes are lovely (though occassionally a bit milder than they first sound), and it represents Charli's pretty seamless fusion of classic and very-now leftfield pop trends she's been honing for the past few years- but it's not quite the cage-rattler some are making it out to be. It's smart, propulsive, but perhaps a bit too safely (or borrowed) weird to be something truly game-changing, perhaps in the earlier part of the decade it would seem more out-there but in these scattershot days where anti-pop can often go pop it feels a bit more comforting than challenging. But the music slaps (fellow kids) enough so really it doesn't matter as long as the tunes work this successfully, being merely a consistently banging pop album more than fills a need at this moment in time.

"Charli" contains all of the accessible sing-along pop hooks you would expect from a pop record, but completely amps it up with experimental electronic production from the likes of A.G. Cook and friends. It is crystal clear from the first listen that this album is not only a combination of, but also an upgrade of the sound Charli XCX has been experimenting with ever since 2016's "Vroom Vroom" EP which featured production from Sophie Xeon. The album adds onto the sound of those previous projects, blending elements of 80s synthpop, 90s eurodance and modern club beats all into a cohesive and futuristic whole. It's fantastic.

Wonderfully experimental. This is the only album of it's kind and has the potential to influence pop for years to come. I think the rock-only nerds got to the album first (currently a 72) - ya'll know pop music can be good, right? Especially when it's this euphorically fucked up?

Your feedback for Charli