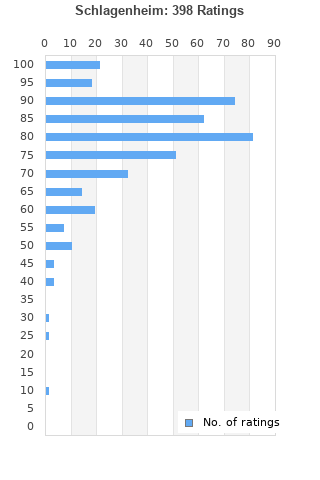 Black Midi-Schlagenheim (UK IMPORT) VINYL NEW
Condition: New
Time left: 1d 14h 44m 40s
Ships to: Worldwide
$31.68
Go to store
Product prices and availability are accurate as of the date indicated and are subject to change. Any price and availability information displayed on the linked website at the time of purchase will apply to the purchase of this product.  See full search results on eBay

Schlagenheim is ranked as the best album by Black Midi. 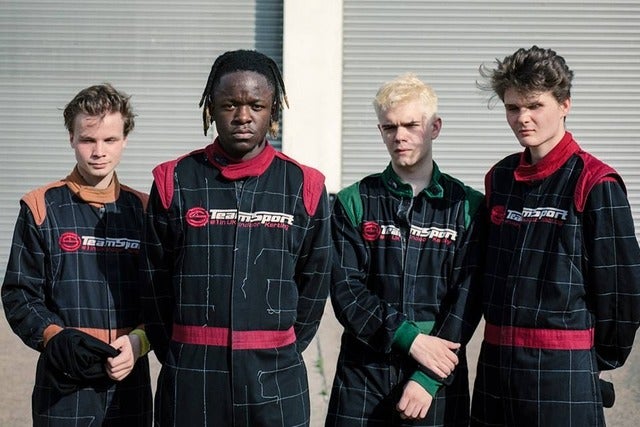 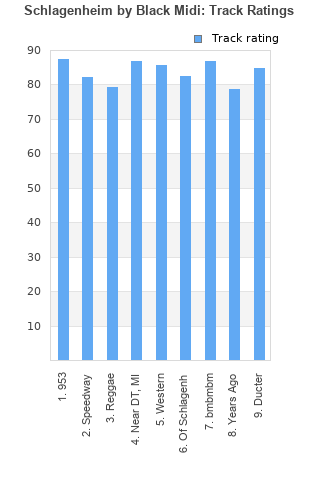 Rating metrics: Outliers can be removed when calculating a mean average to dampen the effects of ratings outside the normal distribution. This figure is provided as the trimmed mean. A high standard deviation can be legitimate, but can sometimes indicate 'gaming' is occurring. Consider a simplified example* of an item receiving ratings of 100, 50, & 0. The mean average rating would be 50. However, ratings of 55, 50 & 45 could also result in the same average. The second average might be more trusted because there is more consensus around a particular rating (a lower deviation).
(*In practice, some albums can have several thousand ratings)
This album is rated in the top 2% of all albums on BestEverAlbums.com. This album has a Bayesian average rating of 79.4/100, a mean average of 79.3/100, and a trimmed mean (excluding outliers) of 79.6/100. The standard deviation for this album is 13.2.

Wow, I guess this album will become a classic in time!

Only song that I liked was Western, also Ducter was okay, the other songs sounds more or less like chaotic noise. I like bands like Mars Volta or Swans, which have a similar approach, but this doesn't sound appealing or interesting to me. Sometimes there are good ideas in a song, but I wouldn't want to hear the whole song again.

I can really appreciate music that plays with rhythms, but I'm not just gonna praise everyone that does that. I've heard better. It's too random: I want my experimental music to make me go "how do you come up with that?", and not "why do you come up with that. Here and there they go into Trout Mask Replica territory too with melodies that don't make sense, quite succesfully I have to say, but I still have to hear one example of that style that really convinces me to take it serious. This is definitely not going to do the trick, for me (which isn't important) and for future artists. That is: we will not hear anything of this in the future, if we're going to assume this band added anything considerably to the style in the first place. The vocals sound like all '80s metal bands. The riffs too (I mean the snippets), even though they sometimes seem to go to hardcore punk too; I mean why not, it's already decades after any of those genres are any relevant, so there's no need to feel any rivalry.

A sprightly stiching of well-worn threads, still nicer to admire at in the window than to actually wear but provides a solid fusion nonetheless if nowhere near the genre-breaking stroke of genius it's being hyped up to be... temper expectations and it will be a lot more rewarding.

Pretty cool. Reminds me occasionally of obscure 70s prog band Amon Duul IIs album "Wolf City" and at times some of those post punk revival bands from the early 2000s.

The whole album really reminds me of Discipline era King Crimson, Slint and the Talking Heads. Excellent first project and I'm excited to see where they go for the next one.

A refreshing re-invigoration of post-hardcore with the complexity of math rock while also sporting neo-prog flourishes and an irreverent, self-indulgent art punk inventiveness that is equal parts playful and dense. A modern classic in the making.

She moves with a porpoise
*Noise*


black midi is not just a hype, for several months, I promise a bright future for this new English band. The four musicians have risen with ridiculous ease to the rank of the most exciting band of the UK underground scene, claiming their outsider status by an incredible stage presence. Everything starts with a live recorded in the studios of the KEXP radio. They become the ones we expect, they intrigue the specialized press and remain however in a virtual silence. And after months of waiting, the time of the first effort has finally come; "Schlagenheim" is released. The first impression must always be the strongest; and that, black midi understood it well. The visual and musical chaos offered by the quartet is in fact perfectly controlled. Architects of anarchy, black midi also know how to slow down the pace. Schlagenheim has just closed the question that burned the lips of all music lovers: black midi are not just a hype. They are reinventing guitar rock with one of the most dazzling debut album of the decade.