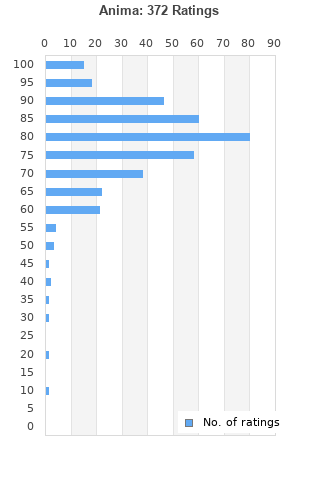 Anima is ranked 2nd best out of 8 albums by Thom Yorke on BestEverAlbums.com.

The best album by Thom Yorke is The Eraser which is ranked number 778 in the list of all-time albums with a total rank score of 2,358. 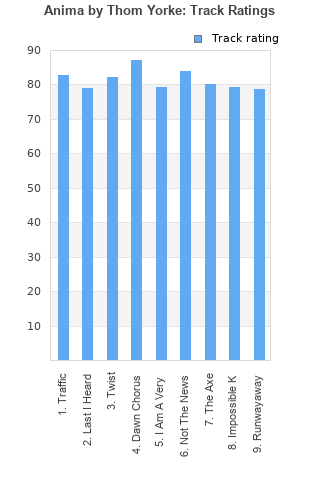 Rating metrics: Outliers can be removed when calculating a mean average to dampen the effects of ratings outside the normal distribution. This figure is provided as the trimmed mean. A high standard deviation can be legitimate, but can sometimes indicate 'gaming' is occurring. Consider a simplified example* of an item receiving ratings of 100, 50, & 0. The mean average rating would be 50. However, ratings of 55, 50 & 45 could also result in the same average. The second average might be more trusted because there is more consensus around a particular rating (a lower deviation).
(*In practice, some albums can have several thousand ratings)
This album is rated in the top 2% of all albums on BestEverAlbums.com. This album has a Bayesian average rating of 79.3/100, a mean average of 78.7/100, and a trimmed mean (excluding outliers) of 79.5/100. The standard deviation for this album is 12.1.

Listened but went through

Some great tunes on this album.

It's not bad, but it strikes me that the other guys in Radiohead are good for Thom Yorke.

A lot of good in there ! Thom Yorke makes a great follow-up to his solo work.

Without a doubt, this is Thom Yorke's best and most cohesive album. It sounds somewhat like a mix of his first two solo projects. It doesn't sound too computerized like TMB but not as dry as The Eraser. The lyrics are as esoteric as ever but they're delivered in a way that I think aligns more than with the music than it has in the past. It seems to me like he was too vocal on his debut and not vocal enough on his follow-up but found a good compromise for Anima. I wasn't really blown away by any of the songs but they're all pretty good and work together to make a quality album. "Twist" is probably my favorite.

The best Thom Yorke Album, creates an atmosphere kind like Kid, the production of Nigel Godrich is outstanding (as always), the album takes you in a trip of anxiety yorke feels around society and his loved ones showing his emotional isolation with things he dont want to go away of but he must like the dead of his ex-wife
cautivates you with so little instrumentation just some electronic sounds that you can sense at the back of every track

Honestly, I wasn't all that excited to listen to this. As a Radiohead-head, I often found Thom's solo work (Atoms For Peace included) to be not much more than self-administered homework between Radiohead sessions.
ANIMA changes this. Instead of coming off sounding like a bored music student arbitrarily fiddling with keys and knobs, here Thom sounds like he has an objective, a narrative (both musically and conceptually) that he wants to see through.
From the groovy opening "Traffic" right through to the hauntingly layered "Runwayaway", the music is poised, diverse, feverish and constantly keeping you guessing.
This isn't "side-project Thom", this is a master of his craft sitting down and taking time to sketch out and construct at once an earnest and euphoric collection of music.
It's no secret Radiohead's previous two albums left some die-hards dissatisfied. This will not.

You can predict the style of a Thom Yorke album, but not the actual content. It doesn't seem to be wearing thin. Good record

Your feedback for Anima