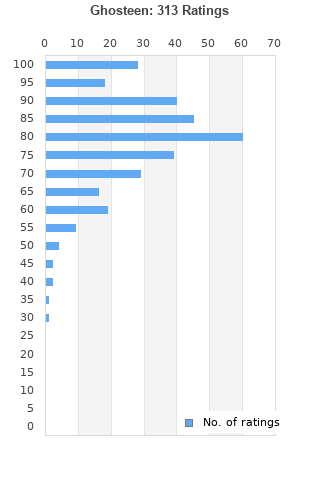 Ghosteen is ranked 9th best out of 27 albums by Nick Cave & The Bad Seeds on BestEverAlbums.com. 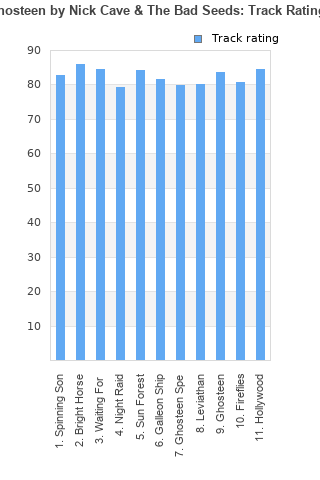 Rating metrics: Outliers can be removed when calculating a mean average to dampen the effects of ratings outside the normal distribution. This figure is provided as the trimmed mean. A high standard deviation can be legitimate, but can sometimes indicate 'gaming' is occurring. Consider a simplified example* of an item receiving ratings of 100, 50, & 0. The mean average rating would be 50. However, ratings of 55, 50 & 45 could also result in the same average. The second average might be more trusted because there is more consensus around a particular rating (a lower deviation).
(*In practice, some albums can have several thousand ratings)
This album is rated in the top 2% of all albums on BestEverAlbums.com. This album has a Bayesian average rating of 79.5/100, a mean average of 79.4/100, and a trimmed mean (excluding outliers) of 79.8/100. The standard deviation for this album is 13.3.

And out of nowhere, Nick Cave returns with another banger!

For some reason I kind of lost track of Nick Cave after Push The Sky Away, an album which I liked by the way, but then I went to see him only last week and it was wonderful and I am now firmly back onside. The tracks performed the other night were mainly from Carnage and indeed Ghosteen and they were as good as anything he has done before I think, this album has great vocals and is littered with dark lyrical wonders, I think Cave is more or less at the height of his powers right now.

I always seem to rate nick cave albums highly but even though I consider myself a fan, I don't listen to him often, I have to really be in the mood. Therefore when I first had a listen to part of this when it was released, I really wasn't fussed at all. Right now it sounds fantastic for all the reasons others have said.

A little too slow for me. There isn’t much variety between the songs. I’m not the biggest fan of the vocals but I appreciate the passion. You can feel the anguish throughout the album. The lyrics are the best part of the album, in my opinion, but there isn’t enough else happening for me.

It pains me to rate this album so low. Not only is it a heartbreaking, deep look at loss and mourning, but it's also really beautiful. The shimmering synths sound just like the cover looks - alive and crisp. But there's just too much here, and there's not enough variety. The first couple songs are great, especially "Bright Horses." I had to stop listening after that one when I was at work for fear of breaking out in tears in the middle of the work day. The opener finds Cave in a mode that he's often in on this album, spinning abstract stories out of really specific, familiar components. Nowhere does he do this better than on the closer, "Hollywood," which is one of the 5-10 best songs he's ever written. It would be in that club even just with the first half, but the second half, and it's heartrending story where you can tell Cave is nearly in tears during his falsetto as he's both assuring us it gets better while also begging that things will get better, absolutely pushes it over the top.

So yeah, it's a shame that for the most part the rest of this album is so samey. I probably like every song here, but listening to it all in a row is, frankly, a chore. There are tremendous moments that catch you off guard, like "Mama Bear holds the remote, Papa Bear just floats, and Baby Bear is gone to the moon in a boat." These moments pull you back in as you're drifting off, but the great moments like this are too spread out in minimal repetitive passages. This album is a landmark and a career highlight. But unfortunately I have no desire to hear it again.

Probably the most heartbreakingly beautiful album I have ever heard. Nick Cave displays all the pain and anguish of losing a child in these intimate and extremely personal songs. They sound nothing like Cave has ever done before and yet the record feels like the final part of a musical trilogy that started with "Push the sky away" (with "Skeleton tree" in the middle) although because of the lyrical issues at stake here I doubt that that was ever Cave's intention. Yes, it's hard listening, but it will become a classic and another great Nick Cave album although it's the one he didn't want but had to make.

Unfortunately I found this latest offering a 68 minute slog

I really wanted to like this album but try as I might it became more difficult each time I tried. Its far from a bad album , I just found the entire experience ... slow. In saying that I acknowledge the pain infused within this album following the horrible family tragedy. It's simply a matter of personal opinion I didn't enjoy this as a whole experience

(Cue Down Votes for going against popular consensus )

Save you the trouble ...

Your feedback for Ghosteen