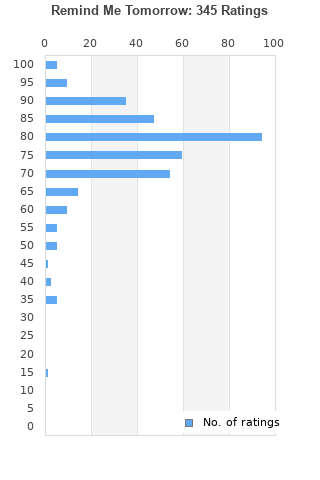 Remind Me Tomorrow is ranked 2nd best out of 8 albums by Sharon Van Etten on BestEverAlbums.com.

The best album by Sharon Van Etten is Are We There which is ranked number 1393 in the list of all-time albums with a total rank score of 1,263. 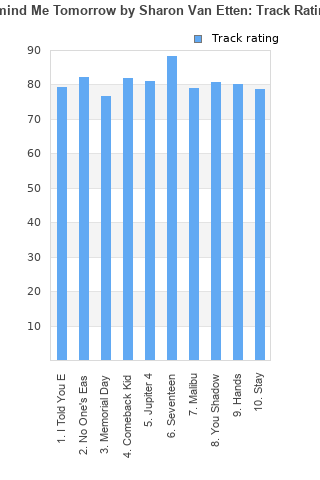 Rating metrics: Outliers can be removed when calculating a mean average to dampen the effects of ratings outside the normal distribution. This figure is provided as the trimmed mean. A high standard deviation can be legitimate, but can sometimes indicate 'gaming' is occurring. Consider a simplified example* of an item receiving ratings of 100, 50, & 0. The mean average rating would be 50. However, ratings of 55, 50 & 45 could also result in the same average. The second average might be more trusted because there is more consensus around a particular rating (a lower deviation).
(*In practice, some albums can have several thousand ratings)
This album is rated in the top 3% of all albums on BestEverAlbums.com. This album has a Bayesian average rating of 77.8/100, a mean average of 76.9/100, and a trimmed mean (excluding outliers) of 77.9/100. The standard deviation for this album is 11.4.

The first time I listen to Sharon Van Etten. Some songs really good, but … not quite impressed.

I think I enjoy a couple of songs here much more than the album itself. It doesn't feel consistant but there are some tracks that are really brilliant, with "Seventeen" being one of the best songs in 2019 and maybe the decade.

Not as consistent as earlier work, but in stretching herself out, she has hit higher peaks.

This is the first time I've listened to Sharon Van Etten so maybe I'm missing something but I wasn't a big fan of this album. The music is not that interesting to me and the lyrics and themes are a bit too personal for me to enjoy. Normally, I can relate to at least the emotion that the artist is feeling if not the situation but I didn't get that from this record. They were even a little distracting at times. "Stay" is the only song that I have an urge to listen to again.

Beautiful record from front to back. "Jupiter 4" in particular is paralysing in its haunting beauty, quite possibly my favourite track of the year so far. Other stand outs like "Comeback Kid", "You Shadow" and "Hands" are dictionary defined earworms.
Love the mixed-bag style of this thing, from the heartland rock of "Seventeen" to the brooding trip hop of "Memorial Day", it all seems (to me at least) to gel together nicely.
That's not to mention John Congelton's production which is on point, as always.

Not quite as big a leap as her last album, and this feels a bit too uneven- it's more languid numbers just tend to drift away rather than adding to a fuller, bittersweet synth-assisted ambience she seems to be going for here. But when it's on, it's on, as she's definitely thrown away the more studied feel of her earliest albums for something that feels much more personal and vital. It doesn't always work, but when it has a surer hand it's among the best music Ive heard in recent years.

Edit: For his fifth studio album, the American artist is certainly more mature. In this album, she returns to her folk roots and she refers to the classic Rock. To say that we would never have imagined that Sharon Van Etten would put herself in danger in this way is perhaps a little exaggerated, but we may think that it took a producer like John Congleton to unleash the power which slept in her, which allows her today to create tracks combining purity and intensity. At 37, Sharon Van Etten has long since passed the album of maturity. And yet, given the slap that represents "Remind Me Tomorrow", we say that there is really no age to become an adult, in every sense of the term.

Your feedback for Remind Me Tomorrow