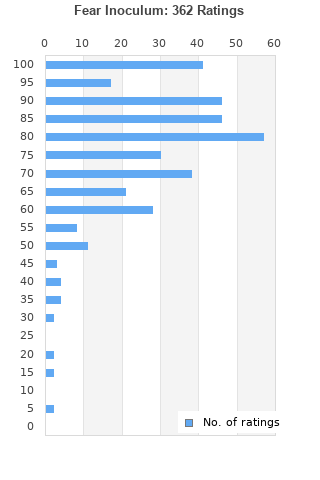 Fear Inoculum is ranked 5th best out of 8 albums by Tool on BestEverAlbums.com.

The best album by Tool is Lateralus which is ranked number 182 in the list of all-time albums with a total rank score of 9,528. 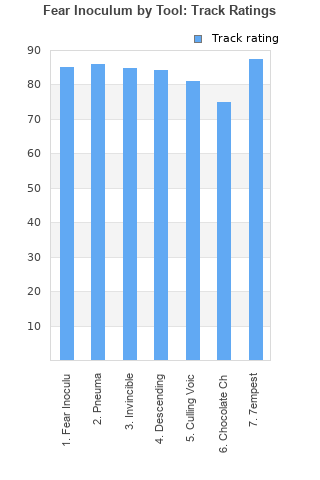 Rating metrics: Outliers can be removed when calculating a mean average to dampen the effects of ratings outside the normal distribution. This figure is provided as the trimmed mean. A high standard deviation can be legitimate, but can sometimes indicate 'gaming' is occurring. Consider a simplified example* of an item receiving ratings of 100, 50, & 0. The mean average rating would be 50. However, ratings of 55, 50 & 45 could also result in the same average. The second average might be more trusted because there is more consensus around a particular rating (a lower deviation).
(*In practice, some albums can have several thousand ratings)
This album is rated in the top 3% of all albums on BestEverAlbums.com. This album has a Bayesian average rating of 77.9/100, a mean average of 76.9/100, and a trimmed mean (excluding outliers) of 78.1/100. The standard deviation for this album is 17.6.

My expectations were incredibly high for this one. I think it´s a very good album, but I was expecting something different, perhaps more experimentation with instrumentation, a slightly different sound. So I guess I really liked it but still I´m a little dissaponted, strange.

It has taken me maybe 10 to 15 listens (and being absolutely in the moment with their music) to fully understand and appreciate this great album. In fact, earlier on I refused to listen to it simply due to the rediculous hype surrounding it. It takes patience, an open mind and a willingness to go on a journey with the band. It is probably worth not hanging on too tightly to what Tool has done previously here, although IMO Lateralus was the major stepping stone that launched them on this tangent. There are many subtle shifts in tempo throughout (and rediculous time signature variations that work incredibly well) - including some very tranquil, meditative moments to start off songs or as interludes, but it makes it well worth the wait as the songs build into amazing crescendos. Think of llght and shade, yin and yang - these guys are the masters of it, and it is an apex of their maturity and musicianship up to this point in time. Maynard's vocals appear lighter on than in previous releases (although I still think his singing is on a high level), allowing the music to breathe, and feeds well into the ebs and flows throughout this album. Ignoring the filler tracks in the digital version, there is barely a weak moment. I think even the drum solo of Chocolate Chip Trip is tastefully melded in as a diversion and showcases Carey's freakish drumming skills - although there are plenty of moments throughout the album demonstrating the extraordinary level he is on. Culling Voices is about the only track that is slightly weaker then the rest for me - but still essential in this epic journey the band are taking you on. This is likely a finale for Tool (I hope not), but if that's so, what a way to go out.

this is the worse Tool album, sadly

This is my favorite Tool album. It's like a sequel to Lateralus, with it's more complex musical arrangements, it's cleaner more polished sound. It's everything I loved about Lateralus but with even more. There isn't a single track that I'd say is even mediocre: It's very hard to single out specific tracks as standouts because every track is a standout. But if I had to pick some, I'd say Pneuma and 7empest are my favorites. This album is perfect to me.

Returning a year and a few months later, I cannot believe how low this album is rated (I guess that goes for most Tool albims honestly, I mean Lateralus is only an 81), 78? That's it? How is Pneuma only an 85? how tf is 7empest only an 87? So underrated

My favorite Tool album, but I'm not really sure why. I just love the way this album sounds. It's so polished and perfect.

Your feedback for Fear Inoculum