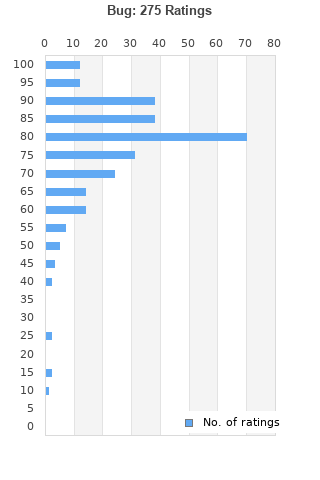 Dinosaur Jr - Bug - Original SST Cassette 1988 - GRUNGE Sonic Youth Nirvana HTF
Condition: Very Good
Time left: 16h 16m 13s
Ships to: Worldwide
$38.00
Go to store
Product prices and availability are accurate as of the date indicated and are subject to change. Any price and availability information displayed on the linked website at the time of purchase will apply to the purchase of this product.  See full search results on eBay

Bug is ranked 2nd best out of 19 albums by Dinosaur Jr. on BestEverAlbums.com.

The best album by Dinosaur Jr. is You're Living All Over Me which is ranked number 302 in the list of all-time albums with a total rank score of 6,614. 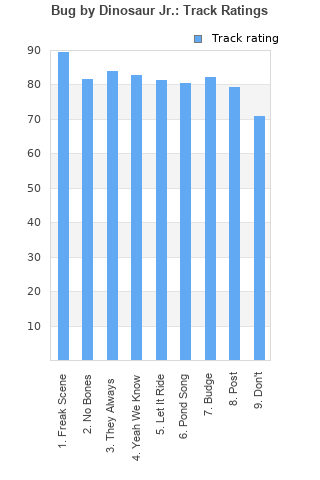 Rating metrics: Outliers can be removed when calculating a mean average to dampen the effects of ratings outside the normal distribution. This figure is provided as the trimmed mean. A high standard deviation can be legitimate, but can sometimes indicate 'gaming' is occurring. Consider a simplified example* of an item receiving ratings of 100, 50, & 0. The mean average rating would be 50. However, ratings of 55, 50 & 45 could also result in the same average. The second average might be more trusted because there is more consensus around a particular rating (a lower deviation).
(*In practice, some albums can have several thousand ratings)
This album is rated in the top 3% of all albums on BestEverAlbums.com. This album has a Bayesian average rating of 78.6/100, a mean average of 77.6/100, and a trimmed mean (excluding outliers) of 78.8/100. The standard deviation for this album is 14.6.

This is definitely not as good as You're Living All Over Me, but I would still consider it a great album. A must listen.

Freak Scene is great. Let It Ride is really good, and a couple other songs are good (They Always Come, Budge). But the rest of the album is too filler to make me highly recommend this album as a whole.

Underrated and overshadowed by You're Living All Over Me, but in reality it's just as good as it.

They were so prolific at this point. Pure quality throughout.

Violent guitars which cut hedges. Songs structures which are nice and easy. Flows together well and I wish this could sit with other albums I had. Can't remember anythng from the lyrics at all though. Could recite every word from the Japandroids albums afer a few listens. Need more loud guitars in the world. A mole from the hole in the garden beside a black cloud on the lawn with a happy face, this album shines out greatness!

Stunning album that starts off like dynamite. Dinosaur are geniuses. No wonder so many artists stole pieces of their sound.

Your feedback for Bug