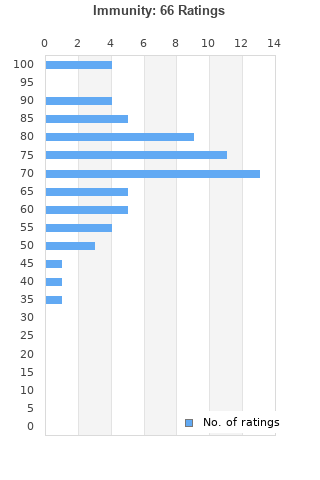 Clairo - Immunity [Used Very Good CD] Explicit
Condition: Very Good
Time left: 2d 6h 47m 59s
Ships to: Worldwide
$13.49
Go to store
Product prices and availability are accurate as of the date indicated and are subject to change. Any price and availability information displayed on the linked website at the time of purchase will apply to the purchase of this product.  See full search results on eBay

Immunity is ranked as the best album by Clairo. 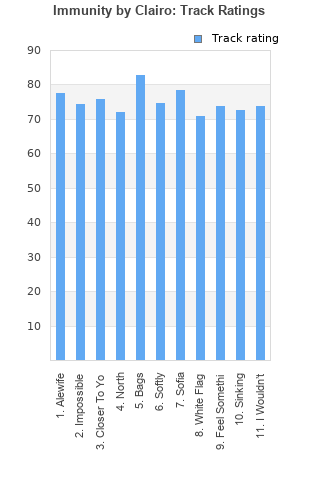 Rating metrics: Outliers can be removed when calculating a mean average to dampen the effects of ratings outside the normal distribution. This figure is provided as the trimmed mean. A high standard deviation can be legitimate, but can sometimes indicate 'gaming' is occurring. Consider a simplified example* of an item receiving ratings of 100, 50, & 0. The mean average rating would be 50. However, ratings of 55, 50 & 45 could also result in the same average. The second average might be more trusted because there is more consensus around a particular rating (a lower deviation).
(*In practice, some albums can have several thousand ratings)
This album has a Bayesian average rating of 71.9/100, a mean average of 70.2/100, and a trimmed mean (excluding outliers) of 71.6/100. The standard deviation for this album is 16.0.

There was some mild controversy going into this release, I guess, but ultimately the only thing striking while listening to it was the general indifference of nearly everything here. There was some buzz about bringing Rostam into the mix, but all that seemed to aid the production was with hammering the sound completely flat, as it all just sort of lazily mix-n'matches VHI-style AdultContemporary balladry with indie rock and electropop and even some light R&B with rarely any noticeable difference in sound or movement whatsoever. Every progression seems to flow horizonantly without ever really rising, scattering or peaking. Yes, I understand I'm well past the age where her songs and their lyrics could've felt more impactful and she seems like a perfectly nice person whose gotten some undeserved hate revolving around the usual modern questions of internet-bred-artist's authenticity, but this really just shows off the kind of modern bastardization/algorithm way of producing music that has really wallpaper'd so-called "genre-mixing" into lightweight, comforting, vanilla blandness. Nothing unlistenable here, and "Bags" is indeed a nice track, but Immunity is pretty much an in-one-ear, out-the-other release that leaves little impression either way. Not saying she doesn't have potential (especially if she can find a way to inject some semblance of spark or spotenaity into her songs), but so far the musical hype feels as questionable as the personal backlash.

Your feedback for Immunity