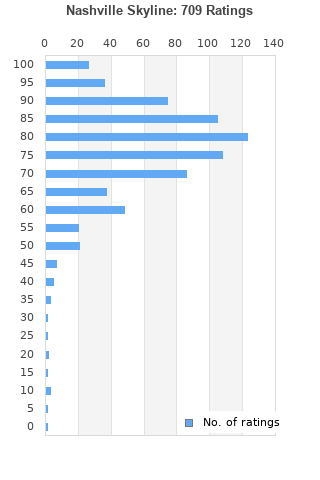 Nashville Skyline is ranked 10th best out of 74 albums by Bob Dylan on BestEverAlbums.com.

The best album by Bob Dylan is Highway 61 Revisited which is ranked number 26 in the list of all-time albums with a total rank score of 35,653. 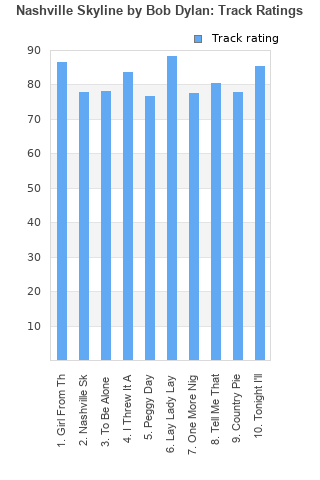 Rating metrics: Outliers can be removed when calculating a mean average to dampen the effects of ratings outside the normal distribution. This figure is provided as the trimmed mean. A high standard deviation can be legitimate, but can sometimes indicate 'gaming' is occurring. Consider a simplified example* of an item receiving ratings of 100, 50, & 0. The mean average rating would be 50. However, ratings of 55, 50 & 45 could also result in the same average. The second average might be more trusted because there is more consensus around a particular rating (a lower deviation).
(*In practice, some albums can have several thousand ratings)
This album is rated in the top 5% of all albums on BestEverAlbums.com. This album has a Bayesian average rating of 76.7/100, a mean average of 75.9/100, and a trimmed mean (excluding outliers) of 76.8/100. The standard deviation for this album is 14.7.

Country Dylan is not my favorite one, but I can't hate on this album, because it is inoffensive and have nice highlights.

A very nice listen. Not Dylan's masterpiece by far but a very good collection of country tunes. Nice to listen to on sunny road trips.

In my opinion, the best country/rock fusion of the late 60s. Even better than "Sweetheart of the Rodeo" and "Songs From The Big Pink." It is almost disconcerting to hear Bob Dylan's "country singer" voice, but not in a bad way. The quality of the songs is strong and varied and the musicianship is top notch. For my money, probably the most underrated Dylan album. Why it is never discussed as one of his finest albums is somewhat of a mystery to me.

Dylan goes Country. Some really nice songs, and Lay Lady Lay is gorgeous. But what's up with that affected voice? It's bizarre.

Bob having a good time!

I don't know why I keep listening to this! There's clearly something here that's timeless and fun.

Better than some of his conceptual albums this one takes a step back in his career to create more simple lyrics on a country sound. I love this album for his simplicity and for his duo with Johnny Cash in "Girl From The North Country" on the definitive version of his composition.

Your feedback for Nashville Skyline