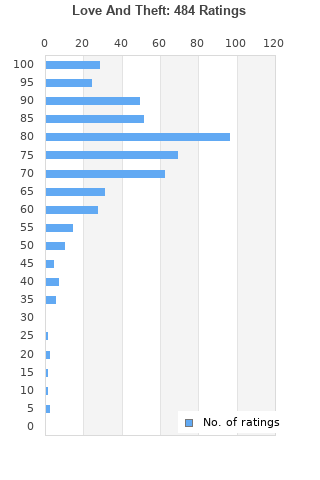 Love And Theft is ranked 12th best out of 74 albums by Bob Dylan on BestEverAlbums.com.

The best album by Bob Dylan is Highway 61 Revisited which is ranked number 26 in the list of all-time albums with a total rank score of 35,681. 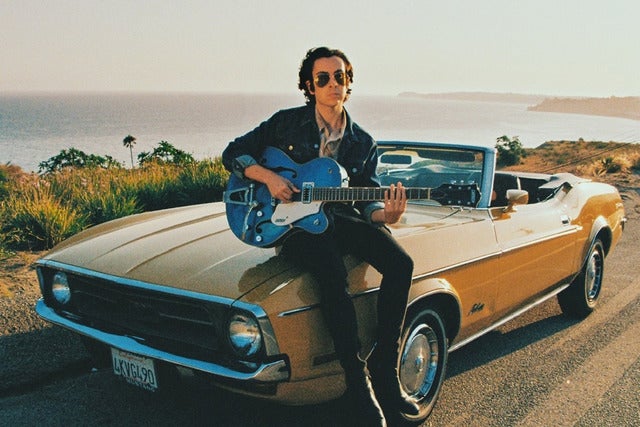 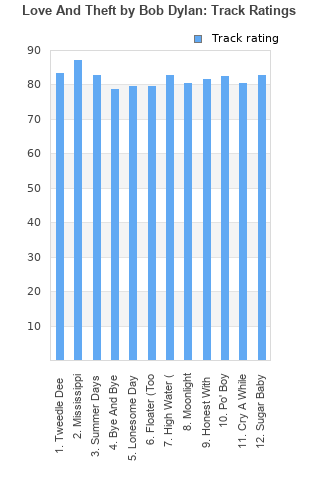 Rating metrics: Outliers can be removed when calculating a mean average to dampen the effects of ratings outside the normal distribution. This figure is provided as the trimmed mean. A high standard deviation can be legitimate, but can sometimes indicate 'gaming' is occurring. Consider a simplified example* of an item receiving ratings of 100, 50, & 0. The mean average rating would be 50. However, ratings of 55, 50 & 45 could also result in the same average. The second average might be more trusted because there is more consensus around a particular rating (a lower deviation).
(*In practice, some albums can have several thousand ratings)
This album is rated in the top 5% of all albums on BestEverAlbums.com. This album has a Bayesian average rating of 76.8/100, a mean average of 75.8/100, and a trimmed mean (excluding outliers) of 76.8/100. The standard deviation for this album is 15.6.

A bluesy album from a raspy voiced Dylan where his fantastic song writing appears in sporadic bursts rather than consistently throughout like previous work. This, along with the instrumentation seeming too lethargic and uneventful at times, makes it very difficult to want to come back to this album.

The album title is undoubtedly a reference to the 1993 Eric Lott book which explores white America's relationship with African American culture, particularly Black music. It has been a relationship of Love and Theft. Dylan provocatively gives his bluesy Americana 2001 album this same name. It's a great album, one of my favorites. The band delivers a fantastic performance. Dylan's voice and lyrics don't disappoint. His voice, especially as an older man, is admittedly an acquired taste, but this is the album that helped me acquire that taste. It fits the music perfectly.

Pretty rockin' for a 70-year-old poet. Good songs, some great, but the band really carries the day.

Very nice album. Bob's voice is a bit ragged, but it suits the music just fine. The backing band is excellent, they shine on every track. The slide guitar on "Honest With Me" is VERY nice! If you're a fan of Mr. Dylan's music, definitely pick this one up.

An album which gets better with each listen. Mississippi is one of my fav. Bob tracked ever. Outstanding.

Bob Dylan would be in awe of himself with this album

Decent album, but one that goes too long.

A great follow up to time out of mind. It's almost the complete opposite to the darkness of the previous album, in which it seems like Dylan's having a great time. Mississippi is one of Bob's great recent songs. Floater, po' boy and high water also stand out. The only disappointment is the dreary and overlong twelve bar lonesome day blues, but the rest is great.

Your feedback for Love And Theft