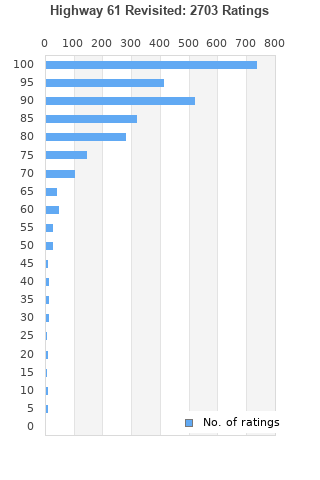 Highway 61 Revisited is ranked as the best album by Bob Dylan.

Tickets from Ticketmaster Get tickets
May
21
Sat
17:00 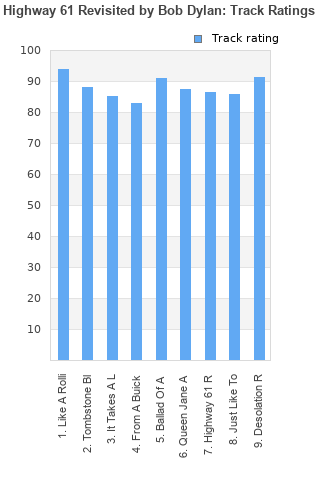 Rating metrics: Outliers can be removed when calculating a mean average to dampen the effects of ratings outside the normal distribution. This figure is provided as the trimmed mean. A high standard deviation can be legitimate, but can sometimes indicate 'gaming' is occurring. Consider a simplified example* of an item receiving ratings of 100, 50, & 0. The mean average rating would be 50. However, ratings of 55, 50 & 45 could also result in the same average. The second average might be more trusted because there is more consensus around a particular rating (a lower deviation).
(*In practice, some albums can have several thousand ratings)
This album is rated in the top 1% of all albums on BestEverAlbums.com. This album has a Bayesian average rating of 88.5/100, a mean average of 87.2/100, and a trimmed mean (excluding outliers) of 88.6/100. The standard deviation for this album is 14.8.

Further down the electric guitar rabbit hole Dylan now starts to push the boundaries of how long a musical story can be within popular music and in doing so creates some of the greatest pieces of musical literary genius of all time.

Desolation Row is my least fav Dylan track. He has read too much modernist literature.

Much like Sgt. Peppers might boast the best closing track an album has ever had, Highway 61 gets to claim the best opening track. A masterpiece in storytelling opening up with one of the greatest songs ever written, rambled by Dylan himself.

This to me is when i learned that dylan could get weird. He surely provokes the listener to feel stuff even when the lyrics are abstract. Great punch to the gut

Everything I love about bob dylan is what comes after this release, everything he would define himself to be, and what music continued and evolved, came from this master work of rock songwriting. My favorite from him based on how concise but expressive it is.
Current favorite tracks: LARS, TB, FAB6, BOATM, QJA, H61R, JLTB, DR

Your feedback for Highway 61 Revisited