Another Side Of Bob Dylan (studio album) by Bob Dylan 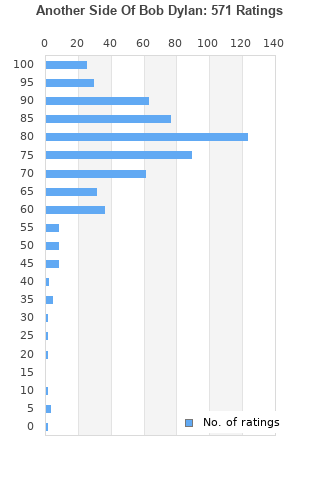 BOB DYLAN: another side of bob dylan COLUMBIA 12" LP
Condition: Used
Time left: 6h 57m 44s
Ships to: Worldwide
$30.00
Go to store
Product prices and availability are accurate as of the date indicated and are subject to change. Any price and availability information displayed on the linked website at the time of purchase will apply to the purchase of this product.  See full search results on eBay

Another Side Of Bob Dylan is ranked 11th best out of 70 albums by Bob Dylan on BestEverAlbums.com.

The best album by Bob Dylan is Highway 61 Revisited which is ranked number 23 in the list of all-time albums with a total rank score of 40,897.

Listen to Another Side Of Bob Dylan on YouTube 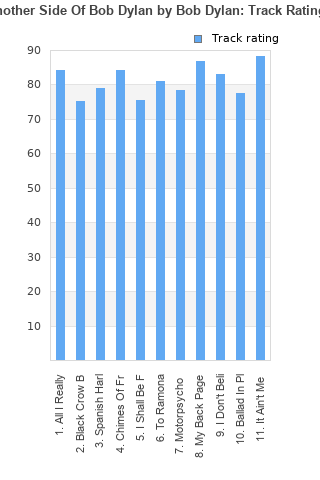 Another Side Of Bob Dylan rankings

Another Side Of Bob Dylan collection

Another Side Of Bob Dylan ratings

Rating metrics: Outliers can be removed when calculating a mean average to dampen the effects of ratings outside the normal distribution. This figure is provided as the trimmed mean. A high standard deviation can be legitimate, but can sometimes indicate 'gaming' is occurring. Consider a simplified example* of an item receiving ratings of 100, 50, & 0. The mean average rating would be 50. However, ratings of 55, 50 & 45 could also result in the same average. The second average might be more trusted because there is more consensus around a particular rating (a lower deviation).
(*In practice, some albums can have several thousand ratings)
This album is rated in the top 4% of all albums on BestEverAlbums.com. This album has a Bayesian average rating of 77.8/100, a mean average of 76.9/100, and a trimmed mean (excluding outliers) of 77.9/100. The standard deviation for this album is 14.7.

Another Side Of Bob Dylan favourites

Another Side Of Bob Dylan comments

Best tracks: To Ramona, Motorpsycho Nitemare, My Back Pages, It Ain't Me Babe
Worst tracks: All I Really Wanna Do, I Shall Be Free No 10, Ballad in Plain D

#5 on my list of best Dylan records. A more personal and less political album than it's predecessor. Notable tracks: Black Crow Blues, It Ain't Me Babe, To Ramona, My Back Pages, Chimes of Freedom.

I live this album, and mostly because of the humour. Tracks like Motorpsycho Nitemare make me laugh out loud, while It Ain't Me Babe and Chimes of Freedom beat anything on Times.

Bob Dylan at one of his last traditional folk albums, still manages to pull out consistent tracks but not one that really makes the cut like a "The Times They Are A-Changing"

Bob Dylan stays conservatively in his comfort zone but excels there.

I guess you know you're listening to true genius when an album this good doesn't appear on the first page of an artists discography on BEA!!!

Recorded in just one night.
I strongly prefer Freewheelin' and Times but still a very good album.

An excellent album and one of the most crucial in the Dylan cannon. The poetic imagery that would spread it's wings in the electric period has it' s genesis here.

Your feedback for Another Side Of Bob Dylan