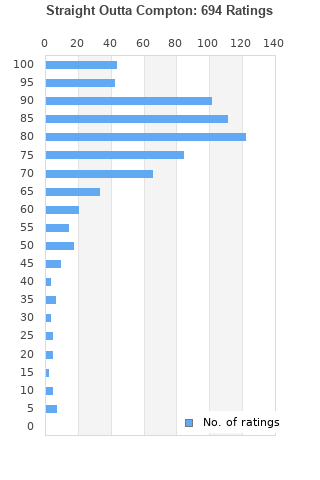 Straight Outta Compton is ranked as the best album by N.W.A. 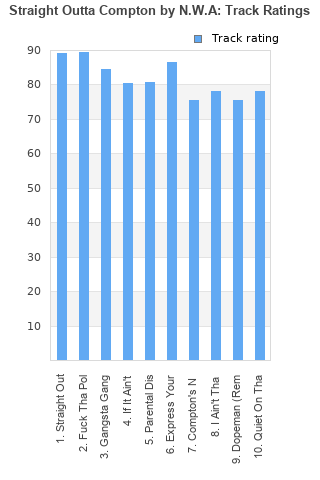 Rating metrics: Outliers can be removed when calculating a mean average to dampen the effects of ratings outside the normal distribution. This figure is provided as the trimmed mean. A high standard deviation can be legitimate, but can sometimes indicate 'gaming' is occurring. Consider a simplified example* of an item receiving ratings of 100, 50, & 0. The mean average rating would be 50. However, ratings of 55, 50 & 45 could also result in the same average. The second average might be more trusted because there is more consensus around a particular rating (a lower deviation).
(*In practice, some albums can have several thousand ratings)
This album is rated in the top 2% of all albums on BestEverAlbums.com. This album has a Bayesian average rating of 78.7/100, a mean average of 77.1/100, and a trimmed mean (excluding outliers) of 78.8/100. The standard deviation for this album is 17.4.

Starts off really strong but unfortunately lags quite a bit in the second half.

Maybe been a little ungenerous towards this over the years. When it came out it was all we played. Even the casual rap fan mates liked this one. And where some hard rap tracks from PE, BDK, Rakim had been explosive, the title track from this was atomic. And that's where the problem has been for me, judging the whole album as not as good as that or FTP or the b side not as good as the a. The title track is a goat against any genre. And the album as a whole is fine indeed and stands up with all the other classic rap of 88. Legendary and inspirational and influential.

Huge out of the gate and mostly fun the rest of the way.

This platter is a nifty lil toe tapper. Just right to enjoy with a glass of mineral water (with honey) in a warm bath.

Seminal Rap album that is incorrectly labelled as the 1st Gangsta Rap release , rather it was the first Gangsta Rap album to garner mainstream success largely on word of mouth and infamy. Interestingly success was found mainly in the homes of disenfranchised white males rather than the black community

For a group that really only released 2 albums proper before internal bickering tore them apart , N.W.A's influence on the gene cannot be underestimated

This album is essential listening for all music fans

What a superb album. Energy. Provocative. Great beats and tunes. Smart lyrics. Great delivery. The Gangsta of Ice Cube and I love the whine of Easy

Not an outright masterpiece but it is a breakthrough for hip hop production (Dre's talents are really noticeable here). The rapping is just ok pretty much everywhere EXCEPT for when the excellent Ice Cube takes the mic... the whole project is elevated by Cube's energy.

One of the most important album in hip hop. Unfortunately it is not well tied-up together. Some forgettable moments and some classic moments.

Your feedback for Straight Outta Compton