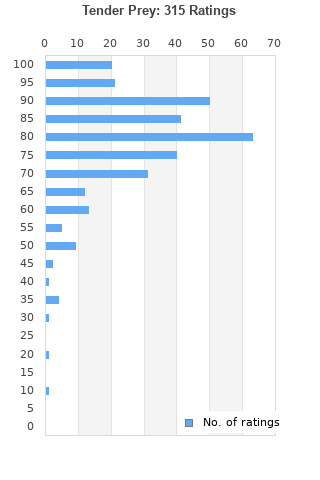 Tender Prey is ranked 10th best out of 27 albums by Nick Cave & The Bad Seeds on BestEverAlbums.com. 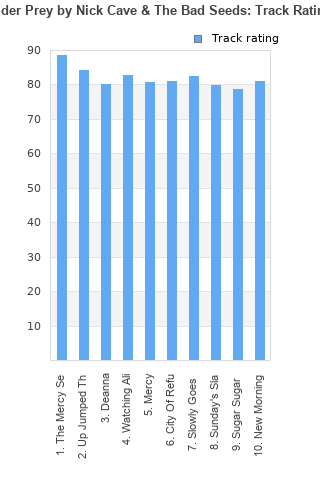 Rating metrics: Outliers can be removed when calculating a mean average to dampen the effects of ratings outside the normal distribution. This figure is provided as the trimmed mean. A high standard deviation can be legitimate, but can sometimes indicate 'gaming' is occurring. Consider a simplified example* of an item receiving ratings of 100, 50, & 0. The mean average rating would be 50. However, ratings of 55, 50 & 45 could also result in the same average. The second average might be more trusted because there is more consensus around a particular rating (a lower deviation).
(*In practice, some albums can have several thousand ratings)
This album is rated in the top 2% of all albums on BestEverAlbums.com. This album has a Bayesian average rating of 79.9/100, a mean average of 79.1/100, and a trimmed mean (excluding outliers) of 80.2/100. The standard deviation for this album is 14.1.

- The Mercy Seat
- Up Jumped the Devil

Yet another great Nick Cave album, and really the last of the more darker earlier records. After this, Cave wouldn't exactly turn into Elton John, but his music would become more accessible, although still not exactly commercial. The tender prey kicks off with, the mercy seat, another classic Cave moment, but the album never lets up. Deanna, is a kind of twisted soul number, city of refuge, another strong cut, and, up jumped the devil, is excellent. Slowly goes the night, is lighter, but like the whole record, it still retains it's dark undertow. Great stuff.

The last of Cave's post-punk era, with by far their strongest songwriting yet. Side one is far superior to side two, but that's saying more about the strengths of the former than the weaknesses of the latter.

Favorite tracks: "The Mercy Seat", "Deanna", "Up Jumped the Devil", "City of Refuge"

The Mercy Seat is my favorite by far! Very intense. i think artist gave it their all on this one.

The first Nick Cave album I bought. Remember was a indie record shop in some creepy basement in Melbourne. This is a masterpiece album,believe Nick Cave was badly strung out on heroin, album cover says it all. A very dark trip this album. I'm sure Cave had some demons of his own to deal with, but help inspire a great record, love all his albums .

If not Cave's best, certainly his most rockin'. Strong themes of religion and manipulation recur throughout. Up Jumped the Devil and Sunday's Slave are the darkest tracks, Watching Alice is beautiful in a sad, creepy kind of way and Deanna is my personal favourite strictly because the upbeat, rocking music is a stark contrast to the morbid lyrical content.

Mercy seat one of THE great tracks. A must have album for anyone into cave at all.

One of the greatest Nick's album.

Your feedback for Tender Prey