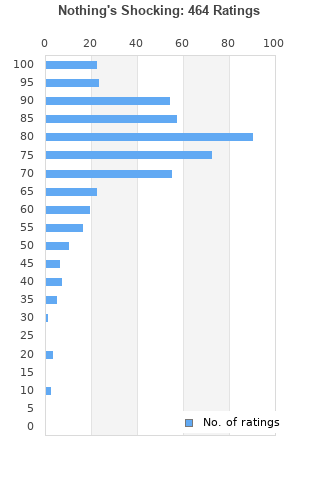 Nothing's Shocking is ranked 2nd best out of 8 albums by Jane's Addiction on BestEverAlbums.com.

The best album by Jane's Addiction is Ritual De Lo Habitual which is ranked number 554 in the list of all-time albums with a total rank score of 3,378. 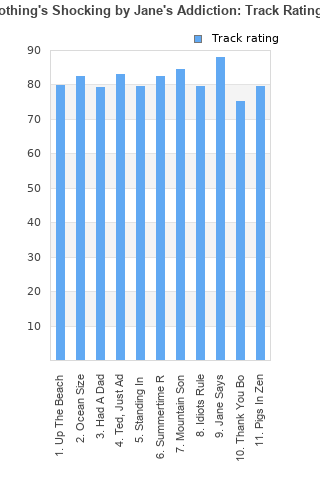 Rating metrics: Outliers can be removed when calculating a mean average to dampen the effects of ratings outside the normal distribution. This figure is provided as the trimmed mean. A high standard deviation can be legitimate, but can sometimes indicate 'gaming' is occurring. Consider a simplified example* of an item receiving ratings of 100, 50, & 0. The mean average rating would be 50. However, ratings of 55, 50 & 45 could also result in the same average. The second average might be more trusted because there is more consensus around a particular rating (a lower deviation).
(*In practice, some albums can have several thousand ratings)
This album is rated in the top 5% of all albums on BestEverAlbums.com. This album has a Bayesian average rating of 76.9/100, a mean average of 76.2/100, and a trimmed mean (excluding outliers) of 77.0/100. The standard deviation for this album is 15.1.

Good album. Not as epic as 'Ritual' as there's a few tracks on this which seem to be there to bulk it out. But the gold makes up for it. Picks for me being 'Summertime Rolls', 'Jane Says', & 'Had a DAD'

Heavy Alternative Led Zeppelin worship mixed with goth/glam styles... a fun album where guitarist Dave Navarro should get lots of praise for how interesting and exciting his playing is.

I don’t care what you think, “Ocean Size” is nearly shoegazing.
At least their influence is clear in alternative rock artists of the ‘90s, especially The Smashing Pumpkins - just put “Bury Me” and the ending “No One’s Leaving” next to each other.

Great album. Nothing's shocking, still sounds utterly unique today. It's funky, punky, and atmospheric. It's cinematic and intimate all at the same time. Personally, I just prefer follow up, ritual de lo habitual, but this is still a superb record in it's own right. This is the kind of record that is pivotal in a person's listening history. It can change the way you listen to music, forever. Maybe, it wouldn't so much now, but at the time, in the late eighties, it was a game changer.

It doesn't get much better than this. A perfect album. Everyone give Nirvana the credit but Nevermind would have never been played on the Radio if Jane's Addiction hadn't blurred the lines between Alternative, Metal and Punk two years earlier with Lollapaloosa, Nothing's Shocking and Ritual!

Your feedback for Nothing's Shocking