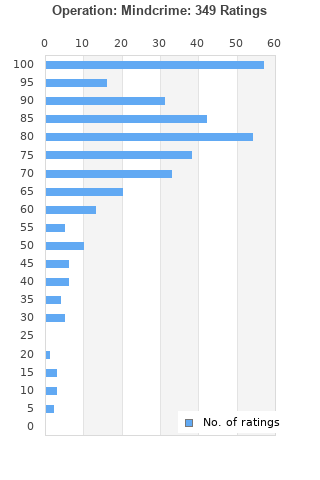 Operation: Mindcrime is ranked as the best album by Queensrÿche. 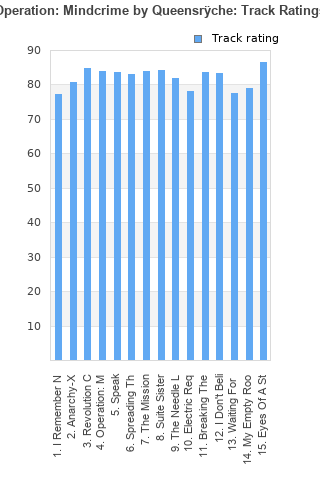 Rating metrics: Outliers can be removed when calculating a mean average to dampen the effects of ratings outside the normal distribution. This figure is provided as the trimmed mean. A high standard deviation can be legitimate, but can sometimes indicate 'gaming' is occurring. Consider a simplified example* of an item receiving ratings of 100, 50, & 0. The mean average rating would be 50. However, ratings of 55, 50 & 45 could also result in the same average. The second average might be more trusted because there is more consensus around a particular rating (a lower deviation).
(*In practice, some albums can have several thousand ratings)
This album is rated in the top 2% of all albums on BestEverAlbums.com. This album has a Bayesian average rating of 78.6/100, a mean average of 77.1/100, and a trimmed mean (excluding outliers) of 78.8/100. The standard deviation for this album is 19.9.

This is a masterpiece of progressive metal.

why this is rated so low???

An absolute masterpiece and probably the best concept album ever. Changed my life.

Not a fan of metal, but this is simply my favorite album of that genre, it feels epic and it´s better aprecciated as a whole.

If only had better production...

One of the best, most well-written and consistent concept albums in metal history, pretty much the best Queensryche album to date.

A classic metal album. Operation:Mindcrime, is an incredibly ambitious piece of work, but there is absolutely no question of it's passion and desire. It's a slightly confusing concept record but the performances of the band and the quality of the songs hold the record together. Late eighties head metal, as opposed to hair metal, something to think about. Good stuff.

I may be a little biased since I pretty much love everything Queensryche does... well did... after the turn of the millennium it kind of went downhill however the undeniable excellence put forth on this album is well..... undeniable.
RYHCE 'N' ROLL

Your feedback for Operation: Mindcrime