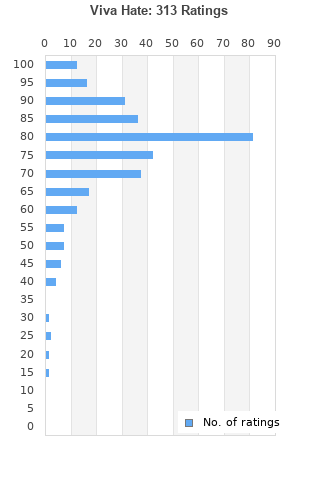 Viva Hate is ranked as the best album by Morrissey. 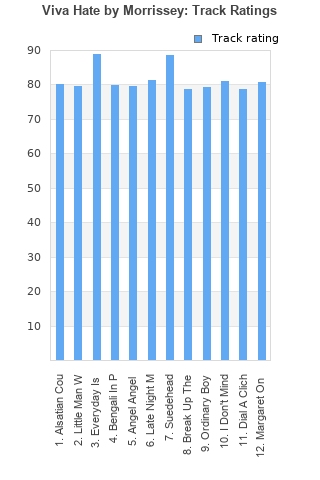 Rating metrics: Outliers can be removed when calculating a mean average to dampen the effects of ratings outside the normal distribution. This figure is provided as the trimmed mean. A high standard deviation can be legitimate, but can sometimes indicate 'gaming' is occurring. Consider a simplified example* of an item receiving ratings of 100, 50, & 0. The mean average rating would be 50. However, ratings of 55, 50 & 45 could also result in the same average. The second average might be more trusted because there is more consensus around a particular rating (a lower deviation).
(*In practice, some albums can have several thousand ratings)
This album is rated in the top 4% of all albums on BestEverAlbums.com. This album has a Bayesian average rating of 77.1/100, a mean average of 76.4/100, and a trimmed mean (excluding outliers) of 77.3/100. The standard deviation for this album is 14.2.

Spotify tracklist was different from that one in BEA?. An airy and great-sounding LP this is.

Honestly IMO an album that adding Johnny Marr would have fit pretty well on Smith's discography.

Given Morrissey recent "foot in mouth disease" I get the apprehension towards Bengali In Platforms but to myears it sounds like he is saying to the immigrant not to get his/her hopes up as this place can be pretty dour and depressing. As someone who in the past had a brief stint as an immigrant in the U.K it kind of talks to me and how I felt over there.
Sure it beats my third world country's standard of living but it can be tough dealing with cultural shock and a general sense of not belonging.

The best Morrissey album along with "You are the quarry", without a doubt. But where is Hairdresser on fire in the tracklist ?

The Morrissey genius is still there, with some great songs and still some humour there. I find elements of Bengali in Platforms disturbing though.

A dower album, which is to be expected. Some stand out moments but somewhat inconsistent.

Perhaps his best album. Any chance it'll be re released with the original and superior title "Education in Reverse"? Remember seeing a copy on cd in a second hand shop many years ago. Should have pounced.

Morrissey's solo debut pretty much carried on where the Smiths left off, it was certainly on a par with Strangeways Here We Come, which had appeared only 6 months prior. This was a very nostalgic collection of songs for Morrissey which very clearly reached back into the early 70's.

Viva Hate was Morrissey's first number 1 album since Meat Is Murder with the Smiths and it spawned two top ten singles in Suedehead and the majestic Everyday Is Like Sunday.

As a huge Morrissey fan I was surprised I wasn't as fond of this album on the first listen. But I was so wrong; this is probably one of the most consistent albums on Morrissey's discography- lyrically beautiful with fantastic instrumentation to compliment his voice.

Lyrically and musically dreary, without the effervescene of Johnny Marr's Smiths sound, this is still a worthwhile solo debut from Moz. Sometimes you just need to wallow in music like this.

Morrissey immediately went solo after The Smiths and he created a fine debut solo album. Although he did not have Johnny on his side, he made some fine songs in this album.

Your feedback for Viva Hate