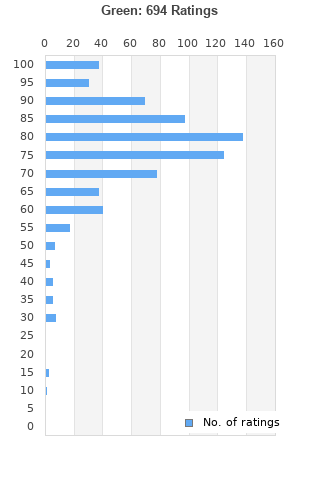 R.E.M. Green Album Cassette
Condition: Brand New
Time left: 5h 1m 28s
Ships to: Worldwide
$4.95
Go to store
Product prices and availability are accurate as of the date indicated and are subject to change. Any price and availability information displayed on the linked website at the time of purchase will apply to the purchase of this product.  See full search results on eBay

Green is ranked 7th best out of 33 albums by R.E.M. on BestEverAlbums.com.

The best album by R.E.M. is Automatic For The People which is ranked number 57 in the list of all-time albums with a total rank score of 23,283. 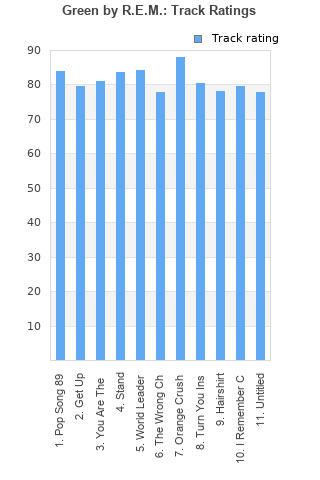 Rating metrics: Outliers can be removed when calculating a mean average to dampen the effects of ratings outside the normal distribution. This figure is provided as the trimmed mean. A high standard deviation can be legitimate, but can sometimes indicate 'gaming' is occurring. Consider a simplified example* of an item receiving ratings of 100, 50, & 0. The mean average rating would be 50. However, ratings of 55, 50 & 45 could also result in the same average. The second average might be more trusted because there is more consensus around a particular rating (a lower deviation).
(*In practice, some albums can have several thousand ratings)
This album is rated in the top 3% of all albums on BestEverAlbums.com. This album has a Bayesian average rating of 78.2/100, a mean average of 77.3/100, and a trimmed mean (excluding outliers) of 78.3/100. The standard deviation for this album is 13.4.

Another good album from R.E.M. ,and some of the songs have a strong folky feel to them. Its also rocks with songs like Pop Song 89,Stand and Orange Crush. Lyrically very good.

This caught my attention as a 20 year old. For me it wasn't bettered. Some belting tracks, pop song 89, get up, orange crush, sounding like a rehashed one I love somewhat.

Green doesn't do much to improve upon the formula they had set for themselves on Document, but R.E.M. doesn't commit any cardinal sins along the way, making it a fairly enjoyable listen. Highlights include: Stand, World Leader Pretend, and Orange Crush.

Never been a big REM fan, but I thought I might find something new in this. I didn't. It's okay.

An Indie album on a major label, It all became a little too polished for me after this

This album captured my attention with it’s diverse topics from questioning our purpose and taking responsibility of the environment. The song Orange Crush got me into R.EM. but my fav track on this album is World Leader Pretend.

This is the first R.E.M. album that has at least semi-clicked with me. I appreciate the richer sound, the moodier and more diverse songwriting, and the overall consistency--at least compared to everything else I've heard from them. It helps that I LOVED "Orange Crush" growing up.

This is a varied album but is unified by a undeniable moodiness. Excellent songs from start to finish and more than a small hint of the sort of sour alt rock that would become so popular in the 90s.

As an R.E.M mega fan this was their last release I really dug .The production here goes up a notch with crisp sharp sounds. The ensuring Green world tour would catapult R.E.M to the threshold of mega stardom . Green sits as my 4th favorite R.E.M album behind Life's Rich Pageant , Fables and Document . Green is a superb album.

Your feedback for Green