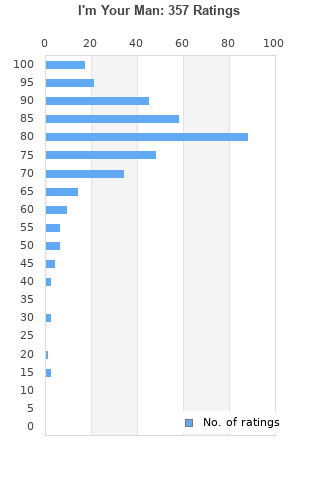 I'm Your Man is ranked 3rd best out of 27 albums by Leonard Cohen on BestEverAlbums.com.

The best album by Leonard Cohen is Songs Of Leonard Cohen which is ranked number 155 in the list of all-time albums with a total rank score of 10,972. 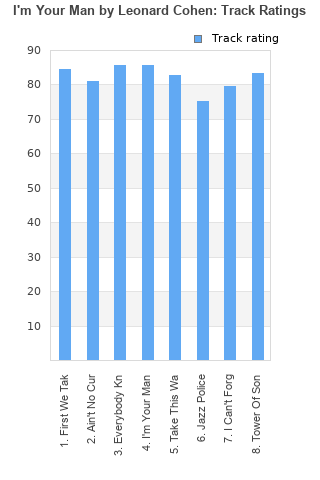 Rating metrics: Outliers can be removed when calculating a mean average to dampen the effects of ratings outside the normal distribution. This figure is provided as the trimmed mean. A high standard deviation can be legitimate, but can sometimes indicate 'gaming' is occurring. Consider a simplified example* of an item receiving ratings of 100, 50, & 0. The mean average rating would be 50. However, ratings of 55, 50 & 45 could also result in the same average. The second average might be more trusted because there is more consensus around a particular rating (a lower deviation).
(*In practice, some albums can have several thousand ratings)
This album is rated in the top 2% of all albums on BestEverAlbums.com. This album has a Bayesian average rating of 79.5/100, a mean average of 78.9/100, and a trimmed mean (excluding outliers) of 79.7/100. The standard deviation for this album is 13.2.

I love the Casio version of Leonard Cohen that was birthed on 1984's Various Positions. This album is the middle piece of that era, with 92's The Future its completion. Cohen would then lay low for awhile, being born yet again in the new millennium with Ten New Songs. The Casio Triptych gives us LC's synthed out sound, a deeper voice, and some of Leonard's best, most spiritual and most apocalyptic lyrics. I'm Your Man is probably the most complete album he ever did in any era. It might be his best work. Some listeners find the synths hard to get past. For me it helped to know that it was LC's idea, not some 80s producer trying to be trendy, and that it was experimenting with a Casio that kept him interested in music. Highlights are the title track, Tower of Song, and Take this Waltz.

There's some phenomenal songwriting on this album. "Everybody Knows" and "Take This Waltz" are as strong as anything from Cohen's peak era. That said, it's impossible to look past the cringeworthy synth flourishes and cloying background vocals, especially on "First We Take Manhattan" and "Jazz Police". Produced in any other decade, this could have been among his best work.

Leonard Cohen plays it extremely cool here and the distance makes for some intermittently charming moments. Definitely not a high impact record.

Although Leonard Cohen only released two albums in the 1980's, it is still very much apparent that he was one of the very few artists of the 60's/70's that got through this decade unscathed. Along with Tom Waits, his output did not suffer the same lack of quality control that hampered the likes of Bowie, Dylan, Neil Young, Lou Reed and Van Morrison. Although, strangely enough, the latter four all released something of a comeback album in 1989.

Lyrically, like pretty much every other Leonard Cohen album, this is great, the synths add another dimension to the tracks and they don't sound dated at all. With only the slight exception of Jazz Police, every track here is excellent, particularly the title track, I Can't Forget, Take This Waltz and the immortal Tower Of Song.

Leonard Cohen's best album of the eighties(well, there were only two), and certainly one of his best ever, I'm your man, sees Cohen swapping the guitars and piano's for synthesizers to create a brilliantly atmospheric soundscape. Off course this wouldn't mean a thing if the songs weren't any good, but fortunately the songs here are some of the best of Cohen's career, and that's saying something. First we take Manhattan, take this waltz, and, tower of song, are all stunning, as is, ain't no cure for love, and, everybody knows. An excellent album and a great example of how an artist can take their music to other places without losing any of their quality. Superb.

One of his best. I prefer most tracks live on his live albums or "boots". Awesome songwriter! MEZ

An eerie, dark, haunting masterpiece. Every song here is gold.

Your feedback for I'm Your Man