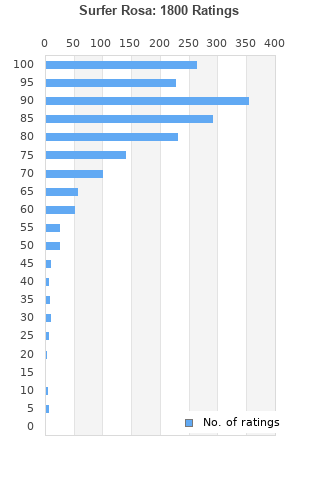 Surfer Rosa is ranked 2nd best out of 24 albums by Pixies on BestEverAlbums.com.

The best album by Pixies is Doolittle which is ranked number 18 in the list of all-time albums with a total rank score of 43,925. 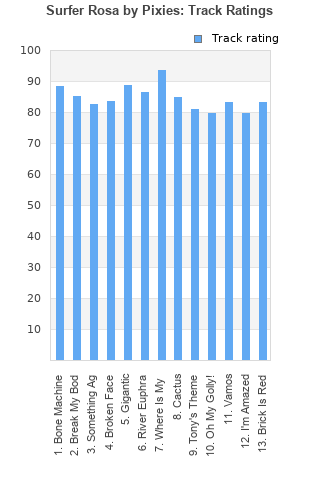 Rating metrics: Outliers can be removed when calculating a mean average to dampen the effects of ratings outside the normal distribution. This figure is provided as the trimmed mean. A high standard deviation can be legitimate, but can sometimes indicate 'gaming' is occurring. Consider a simplified example* of an item receiving ratings of 100, 50, & 0. The mean average rating would be 50. However, ratings of 55, 50 & 45 could also result in the same average. The second average might be more trusted because there is more consensus around a particular rating (a lower deviation).
(*In practice, some albums can have several thousand ratings)
This album is rated in the top 1% of all albums on BestEverAlbums.com. This album has a Bayesian average rating of 84.7/100, a mean average of 83.7/100, and a trimmed mean (excluding outliers) of 84.7/100. The standard deviation for this album is 14.4.

Even the comments between songs are great. Raging songs played with punk aggression and virtuoso skill. Contains possibly the greatest alt-rock song ever. Kim and Frank at their interplay best.

Why are the Pixies so good? Surfer Rosa and Doolittle are two of the most influential albums of all time. So many artists have tried to emulate this sound.

Libro Where Is my Mind y poco más

Surfer Rosa really is nearly as good as Doolittle, the Pixies' next release, considered by many to be the best album of the eighties. It's a little less playful than Doolittle, but also at times a bit riskier, more experimental, and more adventurous. The best track here, and perhaps the best-known Pixies song, is the wonderful "Where Is My Mind?" Frontman and lyricist Black Francis has said that the song was inspired by his experiences while scuba diving in the Caribbean; he had "this very small fish trying to chase me. I don't know why—I don't know too much about fish behavior." It's fascinating to me that a song with that backstory eventually became the backdrop to the hallucinogenic final scene of Fight Club. Such is the liminal space the Pixies occupy in the history of rock music.

Fav. Tracks: Bone Machine, Gigantic, Where Is My Mind?, Oh My Golly!, Vamos.

A masterpiece. Very superior to Doolittle imo (although less accesible). Where is my mind? is not even one of the greatest songs here.

Where Is My Mind?
Gigantic
Bone Machine
River Euphrates
Break My Body
Cactus
Brick Is Red

Nirvana's In Utero was probably the first album I ever loved, so when I heard there was a Pixies album produced by Steve Albini, I was very excited to hear this album. I was not disappointed. Though the songwriting is not as concise as Doolittle, the aggression and production more than make up for it. The obvious standout track on here is obviously Where Is My Mind? But the rest of the album is by no means bad. Strong recommend if you like any sort of alt rock.

Your feedback for Surfer Rosa