...And Justice For All (studio album) by Metallica 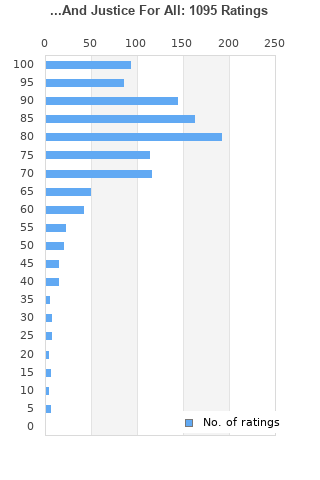 ...And Justice For All is ranked 4th best out of 23 albums by Metallica on BestEverAlbums.com.

The best album by Metallica is Master Of Puppets which is ranked number 107 in the list of all-time albums with a total rank score of 14,350.

ONE... The ONLY Tribute to Metallica
Emerald Theatre, Mount Clemens, United States. 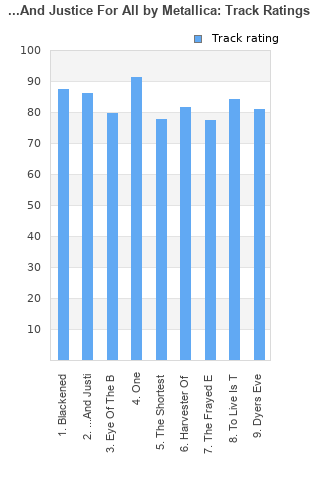 ...And Justice For All rankings

...And Justice For All collection

...And Justice For All ratings

Rating metrics: Outliers can be removed when calculating a mean average to dampen the effects of ratings outside the normal distribution. This figure is provided as the trimmed mean. A high standard deviation can be legitimate, but can sometimes indicate 'gaming' is occurring. Consider a simplified example* of an item receiving ratings of 100, 50, & 0. The mean average rating would be 50. However, ratings of 55, 50 & 45 could also result in the same average. The second average might be more trusted because there is more consensus around a particular rating (a lower deviation).
(*In practice, some albums can have several thousand ratings)
This album is rated in the top 2% of all albums on BestEverAlbums.com. This album has a Bayesian average rating of 79.2/100, a mean average of 77.8/100, and a trimmed mean (excluding outliers) of 79.2/100. The standard deviation for this album is 16.9.

...And Justice For All favourites

...And Justice For All comments

Not best Met-Allica, the drum sounds on this album sucks, thin and the snare dominates.

If this album had the production that Master Of Puppets had, it would easily be one of the greatest metal albums of all time.

This album suffers from it's long length, and abysmal production. Nonetheless, it's a classic of the thrash-metal subgenre.

One has to give them credit for coming up with this. First, they had to deal with the loss of Cliff Burton. Secondly, this signifies a change of direction adding progressive elements to their trademark thrash sound. It is an ambitious, complex and unique album. Despite that, I find this the least accessible of their albums. I can't put my finger on it, the length of it definintely is a factor, maybe the flaws production -wise and the glaring absence of bass that many have already mentioned , but in general I fail to connect with it anyhow. Overall, 65/100.

Favorite Tracks:Blackened, Eye Of The Beholder

Favorites: One, The Frayed Ends Of Sanity

After the tragedy of Cliff Burton's death, Metallica came roaring back with AJFA. Even without the bass, this album is an all time classic thrash metal. It also set5 up Metallica for even greater success with 1991's Black Album.

This one would be up there with Master but the crappy production and lack of bass really pushes it down.

With a better mixing and louder bass, it's up there with Ride the lightning/Master of puppets.

Your feedback for ...And Justice For All