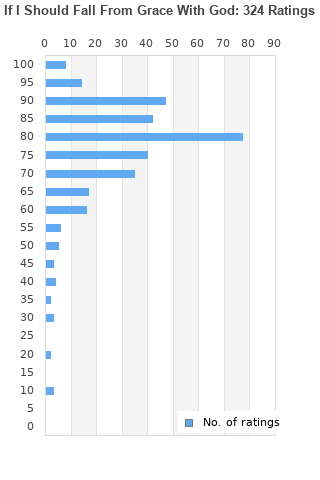 The Pogues - If I Should Fall from Grace with God [New CD] Bonus Tracks, Rmst, C
Condition: Brand New
$9.69

the Pogues IF I SHOULD FALL FROM GRACE WITH GOD punk lp W. INNER SLEEVE
Condition: Used
$18.00

If I Should Fall From Grace With God is ranked 2nd best out of 14 albums by The Pogues on BestEverAlbums.com.

The best album by The Pogues is Rum Sodomy & The Lash which is ranked number 680 in the list of all-time albums with a total rank score of 2,745.

If I Should Fall From Grace With God track list 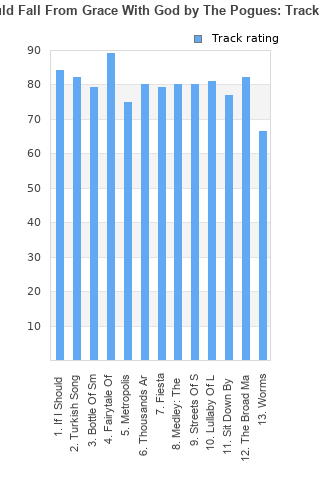 #
Track
Rating/Comments
1.
If I Should Fall From Grace With God
Rating: 84 (61 votes)Comments:

If I Should Fall From Grace With God rankings

If I Should Fall From Grace With God collection

If I Should Fall From Grace With God ratings

Rating metrics: Outliers can be removed when calculating a mean average to dampen the effects of ratings outside the normal distribution. This figure is provided as the trimmed mean. A high standard deviation can be legitimate, but can sometimes indicate 'gaming' is occurring. Consider a simplified example* of an item receiving ratings of 100, 50, & 0. The mean average rating would be 50. However, ratings of 55, 50 & 45 could also result in the same average. The second average might be more trusted because there is more consensus around a particular rating (a lower deviation).
(*In practice, some albums can have several thousand ratings)
This album is rated in the top 3% of all albums on BestEverAlbums.com. This album has a Bayesian average rating of 77.8/100, a mean average of 76.5/100, and a trimmed mean (excluding outliers) of 78.0/100. The standard deviation for this album is 15.3.

If I Should Fall From Grace With God favourites

If I Should Fall From Grace With God comments

Everything about my personality says I should not like The Pogues, yet I love the hell out of them.

P.S. Fairytale of New York is the best Christmas song ever written.

Anyone who tells you they don't enjoy Fairy Tale of New York year-round is either a scrooge or a liar.

Favorite Tracks:Bottle Of Smoke, Streets Of Sorrow/Birmingham Six, Lullaby Of London, The Battle March Medley/Sit Down By The Fire, The Broad Majestic Shannon

Another album whose appeal I understand, yet doesn't really appeal much to me.

This, for me, is the best Pogues album, just shading Rum, Sodomy and the Lash. The stand out track is Turkish Song of the Damned but very track has something going for it.

Another good album, and although, fairytale of new York, is a fantastic song, it shouldn't really be on this album. You don't want to be listening to Christmas songs in july. Overall, it's not as good, rum, sodomy, but probably the Pogues second best album.

Fairytale of New York !! It might just be the best song of the entire 80's... and on top of that, the rest of the album is really good too.

Solid album. Definitely a bit back heavy, but consistently good.

Your feedback for If I Should Fall From Grace With God