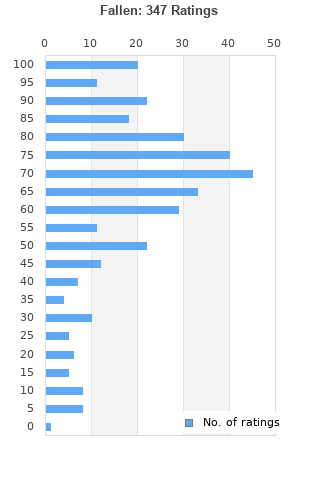 Fallen is ranked as the best album by Evanescence. 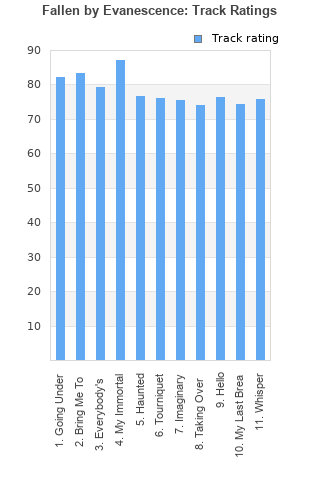 Rating metrics: Outliers can be removed when calculating a mean average to dampen the effects of ratings outside the normal distribution. This figure is provided as the trimmed mean. A high standard deviation can be legitimate, but can sometimes indicate 'gaming' is occurring. Consider a simplified example* of an item receiving ratings of 100, 50, & 0. The mean average rating would be 50. However, ratings of 55, 50 & 45 could also result in the same average. The second average might be more trusted because there is more consensus around a particular rating (a lower deviation).
(*In practice, some albums can have several thousand ratings)
This album has a Bayesian average rating of 64.2/100, a mean average of 64.0/100, and a trimmed mean (excluding outliers) of 64.0/100. The standard deviation for this album is 23.4.

Very harsh rating on this site. It's a great metal album, with a brilliant piano ballad in there too (My Immortal). Amy Lee's voice is fantastic. My highlights are My Last Breath and Everybody's Fool, which is superb.

"My immortal" is fantastic. The rest of the album is rather dull and forgettable.

THE goth metal album. Always will be. Moody but melodic, heavy but smooth, dark but eerily soothing.

Nothing special. There is mostly soft piano music on here, but every now and then they have a sort of nu-metal track, and those aren't bad, but not the best either. I'd say Bring Me To Life is definitely worth a listen, but that's about it.

How I woke up and became a living meme.

yes this received a lot of airplay and maybe too commercial, but a number of the songs on this album are epic and will be on people's play list for decades. My last breath is one of the best songs that didn't receive the play of songs such as going under and everybody's fool. Not bad for a bad out of Arkansas

Your feedback for Fallen