Give Up (studio album) by The Postal Service 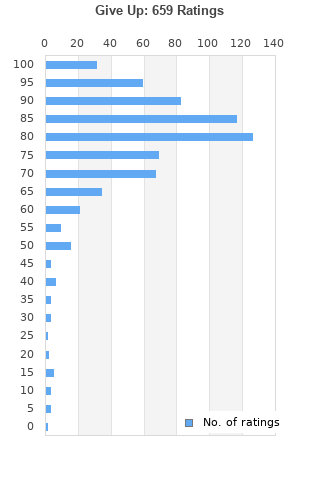 Postal Service Give Up USA CD album promo + e.p DEATH CAB the SHINS SUB POP
Condition: Like New
Time left: 1d 2h 55m 32s
Ships to: Worldwide
£7.98
Go to store
Product prices and availability are accurate as of the date indicated and are subject to change. Any price and availability information displayed on the linked website at the time of purchase will apply to the purchase of this product.  See full search results on eBay

Give Up is ranked as the best album by The Postal Service. 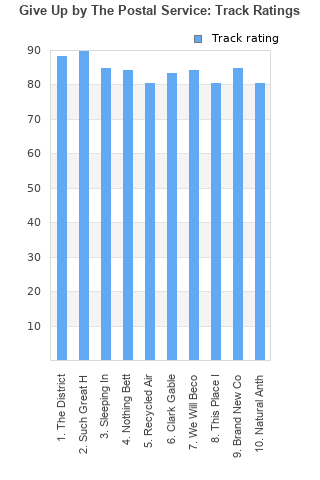 Rating metrics: Outliers can be removed when calculating a mean average to dampen the effects of ratings outside the normal distribution. This figure is provided as the trimmed mean. A high standard deviation can be legitimate, but can sometimes indicate 'gaming' is occurring. Consider a simplified example* of an item receiving ratings of 100, 50, & 0. The mean average rating would be 50. However, ratings of 55, 50 & 45 could also result in the same average. The second average might be more trusted because there is more consensus around a particular rating (a lower deviation).
(*In practice, some albums can have several thousand ratings)
This album is rated in the top 2% of all albums on BestEverAlbums.com. This album has a Bayesian average rating of 79.1/100, a mean average of 77.7/100, and a trimmed mean (excluding outliers) of 79.2/100. The standard deviation for this album is 16.4.

Definitely an 8, this album feels like an 8 as soon as the mid album starts to develop. Really fun, some iconic songs but not a legendary work, still glad I listened to it, different styles are always fun to listen to.

This is album kind of blew me away upon first listen, really good production as well.

An album that is fairly light on the lyrics, with some cliches, it does still turn out to be a pretty good album for the one album band.

This album can sound a little too simple (almost 8-bit) in places but becomes much more interesting when the layers of sound kick in. Such Great Heights and Sleeping In the top tracks for me. Quite different to most of the electronic/synth pop I own.

I like this better than any Death Cab albums. Death Cab has some decent singles, but their albums bore me. This is fantastic.

One album in my top 5 that I will never be able to explain how it got there...it just is.

Fantastic production! Lyrics are great too. This may be the best Ben Gibbard related work I've heard.

Contains some classic Ben Gibbard lyrics that sounds super meaningful if you're just barely paying attention but actually are similar to things high schoolers would write in their notebooks for motivation. It's an interesting album but the beats are a little too simple to really grab me and Gibbard's lyricism doesn't help.

Your feedback for Give Up