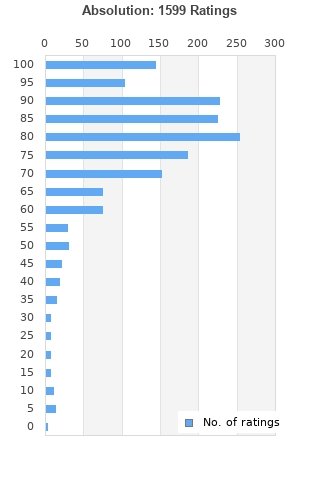 Absolution is ranked as the best album by Muse. 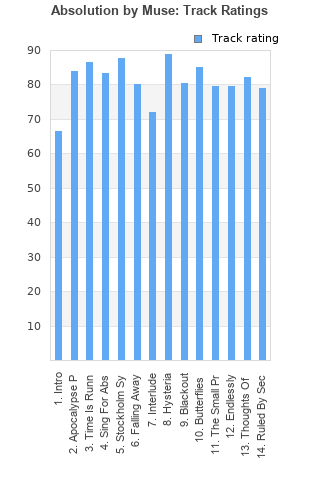 Rating metrics: Outliers can be removed when calculating a mean average to dampen the effects of ratings outside the normal distribution. This figure is provided as the trimmed mean. A high standard deviation can be legitimate, but can sometimes indicate 'gaming' is occurring. Consider a simplified example* of an item receiving ratings of 100, 50, & 0. The mean average rating would be 50. However, ratings of 55, 50 & 45 could also result in the same average. The second average might be more trusted because there is more consensus around a particular rating (a lower deviation).
(*In practice, some albums can have several thousand ratings)
This album is rated in the top 2% of all albums on BestEverAlbums.com. This album has a Bayesian average rating of 78.9/100, a mean average of 77.2/100, and a trimmed mean (excluding outliers) of 78.9/100. The standard deviation for this album is 18.0.

I almost liked this as a whole.. Strong songs...

Obviously I’m not the first to think that Muse has an element of Radiohead in their music, but I actually think that most of the comparison comes thematically. Both bands wrestle with Big Ideas in their songs, but Radiohead comes across a bit more learned.

The other comparison that comes to mind is after hearing song after song with huge, dynamic choruses like Queen or My Chemical Romance. There is a theatrical element here that makes you wonder whether to fully take them seriously.

All the same, no other band sounds quite like Muse and they embrace the wholly positive sound of a bass guitar played to its practical extremes. Fun record to listen to, albeit slightly exhausting after each and every dramatic chorus.

There are some real highlights on this album - Hysteria, Stockholm Syndrome and Time Is Running Out. But most of the album is fairly unremarkable.

As strong and energetic as earlier albums - love these guys

This album is filled with amazing songs that you will see yourself coming back to, time and time again. This is because of the amazing composition of music they have created which blends so many fantastic features. This includes mainly the guitar riffs and the drum work which are both so vibrant and consistently great throughout. The songs Butterflies And Hurricanes, Hysteria and Time Is Running Out display Muse at their peak and really bring the group up to a new level. Despite this, I do think the ending does drop off and I always find my attention wavering by the closing tracks. Overall, this album is amazing and without the few filler tracks and the dip in quality at the end it would be one of the greatest ever made.

If this was the first rock album I discovered on my own, this might have blown my mind. As it stands, I'm too old to fully enjoy any of this. And I'm only 22.

Your feedback for Absolution