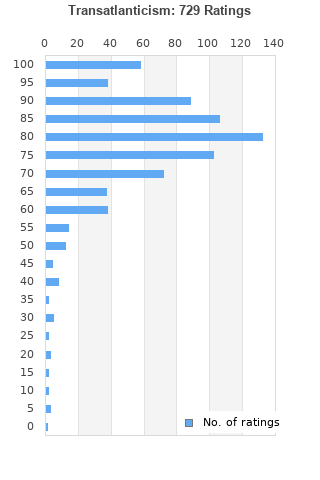 Transatlanticism is ranked as the best album by Death Cab For Cutie. 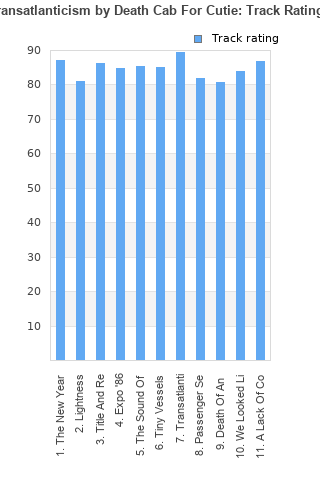 Rating metrics: Outliers can be removed when calculating a mean average to dampen the effects of ratings outside the normal distribution. This figure is provided as the trimmed mean. A high standard deviation can be legitimate, but can sometimes indicate 'gaming' is occurring. Consider a simplified example* of an item receiving ratings of 100, 50, & 0. The mean average rating would be 50. However, ratings of 55, 50 & 45 could also result in the same average. The second average might be more trusted because there is more consensus around a particular rating (a lower deviation).
(*In practice, some albums can have several thousand ratings)
This album is rated in the top 2% of all albums on BestEverAlbums.com. This album has a Bayesian average rating of 78.7/100, a mean average of 77.6/100, and a trimmed mean (excluding outliers) of 78.8/100. The standard deviation for this album is 16.0.

These rankings are SHOCKING. Title and Registration only 85?! Lightness is lowest with 80? The overall rank is there but I was surprised by track ratings.

This album I listened to on repeat when I was in college. Anytime it's a little gloomy outside or I'm feeling a little down this album hits me in the perfect spot. I normally don't love long songs but the title track here is such an interesting journey.

This was an insanely cool listening experience for me, after my first listen i was just kinda like "yeah that was pretty good" but I didn't think I'd listen to it much again. Then Death of an Interior Decorator came on in my shuffle, it was like I'd known the song my whole life, the melody was instantly recocnizable and I started humming along. So I gave the rest of the album another listen and had almost the exact same experience with every other song, there was a sense of nostalgia that accompanies the melody and spectacular lyrics, give this album a listen for sure.

It contains my 2 favorite DCFC songs (Transatlanticism and A Lack of Color), but as an album it doesn't work at all for me. Worse than all their previous efforts, 7/10.

This album is emotionally intense. I mean i thought this album was great, and then I listened to it after getting out of a long distance relationship and it struck me like a ten ton truck. Ben Gibbard's lyrics are poetic, poignant, and extremely relateable. His voice also pairs with the music as well, with a very soft tone to it. I love this album to death and will update my chart soon enough to add it in

Such a great album, and one that I always forget how much I love until I come back to it. Every song is a keeper, but that trio of Tiny Vessels to Transatlanticism to Passenger Seat is one of the greatest three song runs to exist on any album.

Smooth and mellow, it gets better with each listen.

It is easily Death Cab's best album (ok maybe not easily because Plans does give it a run for its money) but I find some songs that get much praised overrated. I do not, BY ANY MEANS, dislike The New Year, Transatlanticism or We Looked Like Giants but I feel there are other moments on the album worthy of the praise that these songs get. I think I only mention Transatlanticism because it's often considered Death Cab For Cutie's greatest song and I just would rather see something else receive that consensus. Highlights for me: The Sound of Settling, Title and Registration, A Lack Of Color and Passenger Seat... ok everything is a highlight to be honest. You can't skip anything. You just can't...

Your feedback for Transatlanticism