Room On Fire (studio album) by The Strokes 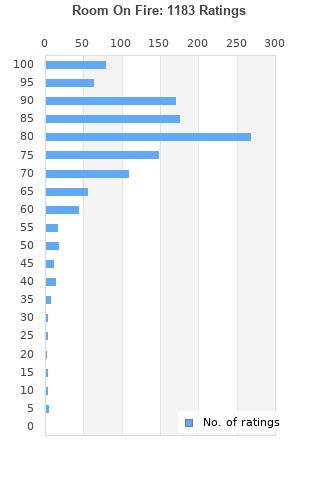 Room On Fire is ranked 2nd best out of 6 albums by The Strokes on BestEverAlbums.com.

The best album by The Strokes is Is This It which is ranked number 23 in the list of all-time albums with a total rank score of 36,895. 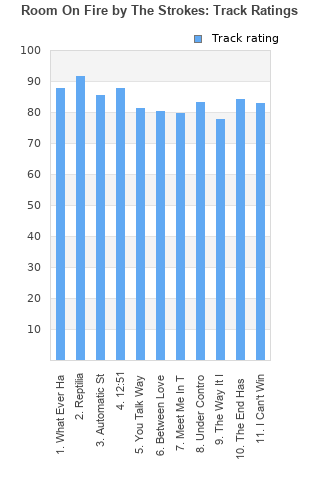 Rating metrics: Outliers can be removed when calculating a mean average to dampen the effects of ratings outside the normal distribution. This figure is provided as the trimmed mean. A high standard deviation can be legitimate, but can sometimes indicate 'gaming' is occurring. Consider a simplified example* of an item receiving ratings of 100, 50, & 0. The mean average rating would be 50. However, ratings of 55, 50 & 45 could also result in the same average. The second average might be more trusted because there is more consensus around a particular rating (a lower deviation).
(*In practice, some albums can have several thousand ratings)
This album is rated in the top 2% of all albums on BestEverAlbums.com. This album has a Bayesian average rating of 79.6/100, a mean average of 78.6/100, and a trimmed mean (excluding outliers) of 79.7/100. The standard deviation for this album is 14.5.

The songs come across as simple, which raises the question of why more bands can’t create music this good. The Strokes have a signature sound and it works.

Not as consistent as Is This It, but it contains my favourite Strokes song, 12:51. Reptilia and I Can't Win are great too.

As with everything else I have heard from this group, a poor imitation of Is This It. City Folks' Nickelback.

They follow the same successful formula as in their debut, but the original is simply better.

Love this record. Not as good as their debut for me but close enough. Some of these songs are up there with their bests.

Their third best imo behind Is This It and The New Abnormal. This is loaded with bangers, but a few tracks in the middle are clear filler. Still, it's not terrible filler, it's just not as outstanding as the songs in the beginning and end. I'm feeling a strong eight to a light nine. traaansition.

Your feedback for Room On Fire